Vu Le: “‘Solutions Privilege’ [is] the privilege of expecting easy and instant solutions that would align with one’s worldview and not challenge one’s privilege. It manifests in the following ways, and because I benefit from male and other privileges, I’m also prone to it, so I’m going to use ‘we’.” – Nonprofit AF

“The last strike, in 2012, was settled in two days, and the 1992 work action, in 15 days. Why is this one taking so long? Talks with Chicago Symphony Orchestra Association management, musicians, subscribers and donors reveal four factors making this strike unlike the others.” – Crain’s Chicago Business

“Netflix will have passed the 150 million global subscriber mark when it reports its latest results this week … About 80% of new subscribers come from markets outside the US.” – The Guardian

What’s new in improvisational music? Where else can innovation go? Mn’JAM Experiment — singer Melissa Oliveira and her visual/electronics/turntablist partner JAM — will show you. – Howard Mandel

The reason these writers choose old-school tools is that when it comes to writing, computers are too efficient and make changing things too easy, and this ease can slow things down. Writing by hand allows writers who pen their drafts to proceed in a linear fashion rather than continually being tempted to rearrange words on the screen before they know precisely where the story is going. – Quartz

London is book-focused enough that, mirroring almost exactly the rise of Amazon, Persephone, a publisher (and recently a bookstore too) that focuses on forgotten early and mid-20th-century books by women, has been thriving. “The idea at the beginning was that if you like one of our books, you’ll like them all. … That has worked almost entirely. It’s quite rare for someone to dislike any of the books. I hate to use the word brand, but we are something of a brand.” – The New York Times

When Eric Hebborn was found with a fractured skull near his home in Rome in 1996, his death was a mystery. But now, filmmakers making an 8-part miniseries about his life (and the more than 1,000 forgeries he claimed to have passed off as real) say they have evidence that not only was he working for the mafia for years, but they may have had him murdered as well. – The Guardian (UK)

Sure, dance is great in and of itself, and it needs to further reason to exist or for people to love it. But some rape survivors see it as one method of healing. “I can dance, and I can dance freely,” one said. (video) – BBC

Andersson starred in 13 mid-20th-century Bergman films. “Her emotionally complex role in Persona (1966), the film that made her acting reputation, was one of the great stereotype reversals in film history.” – The New York Times

Hollywood, you should be ashamed. “Even after years of being called to task for sidelining female filmmakers, studios as a whole continue to rely overwhelmingly on men to lead productions. Why the disconnect?” This will shock everyone: Money. – The New York Times

The Palace of Fine Arts in San Sabastián has been threatened by a real estate developer for five years – and as a final move, UNESCO’s International Council on Monuments and Sites has placed an international warning on the site. “Iñaki Gurrutxaga (PNV), chief of the mayor’s office and responsible for urban planning, points out that ‘the owner has no obligation to maintain it,’ but that the City Council opposes converting it into apartments. ‘The best solution is to give it a use. But cultural use is not the only one: it does not have to be a cinema.'” – El País (Spain)

Krista Vernoff: “It was hard to part ways with [my agent] when the deadline expired for talks between the guild and the agencies. I say ‘part ways’ because I did not fire my agent. Instead, I quoted Lin-Manuel Miranda: ‘See you on the other side of the war.’ In response, my agent did what agents do: he tried to sell me. He tried to sell me on the idea that it is my guild that is being unreasonable here. He tried to sell me on the idea that this action by my guild is damaging and irresponsible to lower and mid level writers. He hit me with the sentence, ‘Your guild didn’t even counter our offer.'” – The Hollywood Reporter

Dame Maggie Smith has to deal with glasses continually during her 100-minute monologue. – David Jays

According to the showrunners, without one woman, Game of Thrones on HBO would never have gotten far at all. Bernadette Caulfield, the executive producer, was in charge of all of this: “With its sprawling tale unfolding in a wide variety of environments, it was almost certainly the most technically complicated series ever made, at times running five units (film crews) simultaneously, on multiple continents, to complete a given season on time.” – The New York Times 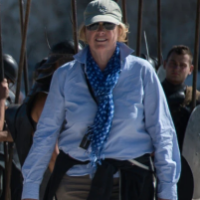