If you don’t want to be a covidiot, spend some of your quatorzaine at home boning up on the new words about Miss Rona, from the Chinese tagline for social distancing to the German term for sports played in empty stadiums (and the one for the weight fans at home are putting on) to the metaphor for hoarding that a Dutch sign language interpreter came up with on the fly. – 1843 Magazine

“Artificial intelligence, and the desire to smooth out the rough edges of human biology through it, has frequently made its way into the movies. But while the most intriguing of films that dabble in the subject tell entertaining stories, they warn of the complications of relying too much on technology to solve problems. Will a smart machine bring salvation or destruction?” – The New York Times

Elizabeth Outka: “I have spent the last five years writing a book about how the sensory and affective climate of the 1918-1919 influenza pandemic infuses interwar literature, often in ways we have not recognized. My new awareness of the traces of that pandemic shifts my perception of this one, as if the sights and sounds from a century ago have re-emerged, becoming timely in ways I both feared and never wanted.” – The Paris Review

The popular composer, who died in 2013, finished writing Krishna in 2005, but it was never published or produced and few were aware of its existence. Then the Crown Prince, a longtime friend of Tavener’s, asked director David Pountney to take a look at it — and, said Pountney, “I was astonished to discover this massive complete work.” He will direct it in the summer of 2024 at the Grange Park Opera festival. – The Guardian

Georgia’s film industry is big. It accounted for $3 billion film/TV production in 2019 and employs 92,100. It’s all shut down now, and many wonder if it will survive. – ArtsATL

“Don Gonyea, NPR’s roving national political correspondent, has a lot of experience recording high-quality audio outside of a studio. He often records his features and spots from hotel rooms across the country while he follows political hopefuls. … We thought Gonyea’s expertise building temporary studios with everyday items like couch cushions and pillows may come in handy for those of you at home who could use some guidance. Here are his top tips.” – Current

“Not only is A.I. a tool for artists, who are employing machine intelligence in fascinating ways, it is also frequently a topic to be examined — sometimes in the same piece. And underlying many of the works is a deep unease. As Lisa Phillips, the director of New York’s New Museum, put it, the worries come down to ‘the prospect that machines are going to take over.’ She added, ‘What are we unleashing?'” – The New York Times

“Arts and culture organizations across the country are estimated to have lost a combined $4.5 billion because of the health crisis so far, according to an ambitious new survey conducted by the Americans for the Arts. And that’s just the start.” – Artnet

Steadily, slowly, research interest in solitude has been increasing. Note, solitude – time alone – is not synonymous with loneliness, which is a subjective sense of unwanted social isolation that’s known to be harmful to mental and physical health. In contrast, in recent years, many observational studies have documented a correlation between greater wellbeing and a healthy motivation for solitude – that is, seeing solitude as something enjoyable and valuable. – Aeon

The team, led by archeologist Pieter van Dalen, were caught digging at the Macatón cemetery in the town of Huaral during the state of emergency on Sunday, April 4. The group from the Universidad Nacional Mayor de San Marcos were taken into custody for breaching Peru’s strict lockdown measures, despite their claim that they were simply securing the national heritage that was left exposed at the site as agreed with the ministry of culture. – Artnet

The emergency package has an initial pot of $10 million for 2,000 grantees. The funds are culled from the operations budgets of the seven US-based organizations: Academy of American Poets, Artadia, Creative Capital, Foundation for Contemporary Arts, MAP Fund, National YoungArts Foundation, and United States Artists. With most of the arts programming cancelled, the grants-giving organizations formed a group to design a mechanism that will allow them to give money to artists directly. – Quartz

What explains why the Philadelphia Orchestra’s BeethovenNOW concert, with two full symphonies webcast from an empty Verizon Hall on March 12, is up to 771,000 YouTube views? Or why the Rotterdam Philharmonic’s abbreviated Beethoven 9th video — with each instrumentalist playing separately from home, titled From Us to You, is closing in on 2 million views since its March 20 posting? – Philadelphia Inquirer

It has been difficult at times, looking at the closed doors of theatres and remembering there are no productions to leave the house to go see or participate in. But if the last couple of weeks of new art, streamed productions, and archival releases (and Andrew Lloyd Webber giving everyone a full weekend of Donny Osmond’s Joseph) have shown anything, it’s that there is still an absolutely overwhelming amount of art out there to consume. Theatre artists may be stuck inside, but it’s certainly hard to argue that they’re not as vibrantly creative as ever. – American Theatre

Superheroes can fight secret quasi-Nazi conspiracies, invading aliens and android armies. But they are ill-equipped to fight the coronavirus. Superheroes on screen have saved the world repeatedly. But, in this real-life crisis, the Marvel Comic Universe’s vision of empowerment via teaming up to blast things to smithereens seems woefully inadequate. – The Guardian

The first wife of Fort Worth oil billionaire Sid Bass, she ultimately “became one of New York’s most respected philanthropists, supporting, in large but unflashy ways, the New York Botanical Garden, the Museum of Modern Art and … the New York Public Library and its Jerome Robbins Dance Division.” She was best known for her long support of New York City Ballet and its school, though she left its board in 2005 after giving warnings, then unheeded, about the behavior of the company’s and school’s leader at the time, Peter Martins. – The New York Times

Online, fans are fuming about being unable to get refunds for concerts that have been postponed, often with no rescheduled dates in sight. As they see it, ticketing outlets are being greedy at a time of crisis, holding billions of dollars in consumers’ cash that people now need for essentials. Their anger is being stoked by the sense that some vendors switched their refund policies mid-crisis to avoid repaying consumers. – The New York Times

“So far, nothing has approached the embarrassment factor of the quarantine meditations from Madonna’s bathtub. But is this classical music’s brave new world? A temporary novelty? A dead end? And will there be some viable mechanism for getting the artists paid?” David Patrick Stearns looks at how some of the new content turning up online for homebound fans is (or isn’t) panning out. – WQXR (New York City)

If we are cut off from experiencing art with others, we are perfectly placed to consider an old and out of fashion idea: the power of private contemplation and solitary engagement. The silence in the room as you read a poem or look at a print, or prepare to listen to a piece of music, isn’t absence. It is the presence of your undivided attention. – Washington Post

Several drawings appear to depict a bulkier shoulder and more vertical arm—a more structurally sound arrangement. But one of these sketches (below) was marked up by an unidentified hand with red ink that tilts the arm outward. – Smithsonian Magazine

Iván Fischer, who founded the ensemble and led it to become one of the most admired in the world today, has been a vocal critic of the increasingly autocratic rule of Hungary’s prime minister, Viktor Orbán. Nevertheless, Orbán’s government and the city of Budapest have announced an arrangement to increase the subsidies that the long-strapped BFO needs to survive. – OperaWire

“Disney has taken an especially hard hit from the pandemic, with its theme parks shuttered, movies postponed and ESPN cable channel without live sports to televise. But the company on Wednesday offered an upbeat update on its newest business — one that may as well have been built for home quarantining.” – The New York Times

Two pots of hot tar took flame at an entrance to the old palace that’s being rebuilt to house the ethnographic collections of Berlin’s various museums. The incident sent black smoke through the city, but actual damage was limited to discoloring of the building’s façade. The $700 million project has been bedeviled by schedule and cost overruns as well as controversy over the contents of its collection, which includes a number of the Benin Bronzes. – Artnet

“Payroll reductions of 35% in the aggregate will include the layoffs of 94 part-time employees and pay cuts of more than 35% for the leadership team, the orchestra said. Orchestra members will receive 65% of their weekly minimum scale beginning April 20.” Music director Gustavo Dudamel will forgo his salary. The Philharmonic will maintain health insurance for all full-time employees. – Los Angeles Times

“The company estimates that loss of the Met season, along with previously canceled tour performances — in Chicago, Detroit, Durham, N.C., and Abu Dhabi in the United Arab Emirates — will cost it $18 million in revenue.” – The New York Times

“Even though the [Broadway] League has extended the shut down, many Broadway insiders don’t expect performances to resume until July at the earliest, with some predicting that theaters will stay dark into September. The extended closure will likely mean that more shows that were eyeing limited runs will instead opt not to open at all, a fate that has already befallen the likes of Martin McDonagh’s Hangmen and a revival of Who’s Afraid of Virginia Woolf? with Laurie Metcalf.” – Variety

This Mahler 8th arrives some four years after the live performances, and it signals not only a high-water mark in Nézet-Séguin’s relationship with the orchestra but a certain evolution in the performance practice of the piece itself. – David Patrick Stearns

Too much of museums’ existing online content, now being repurposed, reminds me of “park and bark” — the great opera stars of yesteryear, standing stock-still at center stage and belting out their arias. By contrast, I found much to admire in purpose-built content that some museums managed to put together on the fly. – Lee Rosenbaum

“When suddenly we have to care about climate, health, and jobs and housing and care and communities, is there a framework around that can help us with all of that? Yes there is, and it is ready to go.” The central premise is simple: the goal of economic activity should be about meeting the core needs of all but within the means of the planet. The “doughnut” is a device to show what this means in practice. – The Guardian 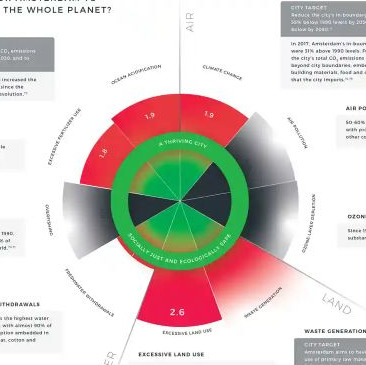