Angelica Frey surveys the subject from the 12th century to the 21st, looking at how the bloody Biblical tale has been used to symbolize “womanly virtue” and modesty, defeating a larger and more powerful adversary, female rage and vengeance, a literal femme fatale, and even resistance against Stalinism and white supremacy. – Artsy

“Fiscal mismanagement, as well as recent sexual misconduct allegations leveled at former board chairman and former West Hollywood Mayor John Duran (accusations that Duran denies), have left the chorus on life support … The chorus has reduced its paid staff, dramatically cut production costs and promised to settle debts to vendors as quickly as possible, but the misconduct allegations have presented other challenges.” – Los Angeles Times

Chip Colwell, senior curator of anthropology at the Denver Museum of Nature and Science, in a New York Times Op-Ed: “Repatriation can turn museums from places of colonialism into mediating spaces that confront and then move beyond their own pasts. If my grandfather took something from your poor and powerless grandfather — and your community continues to suffer because of it — then I am presented with the chance to make things right.” – The New York Times

I understand the logic of “We’ll take everyone’s money” and the logic of “We won’t take any ethically impure money.” Those are pure. What I question is the efficacy of cherry-picking the ethics of the donors to your arts organization. Do you choose to receive or not to receive donations from particular corners of the philanthropic universe because of the nonprofit’s core belief or your own personal core beliefs? Is your collective conscience bothered before you choose to accept the gift or after there’s a public outcry about it? – Clyde Fitch Report

“It is a very peculiar revolution because, in order to succeed at all, it has to have as its aim the reestablishment of the Union. And a great, radical shift in American mores, in the American way of life. … The hope has to be to create a new nation under intolerable circumstances and in very little time and against the resistance of most of the country.” – Literary Hub

“Germany might have more orchestras [than other countries], but it also has more musicians (including those flooding in from abroad) looking to fill positions in them. The audition procedure is often archaic, unnecessarily nerve-racking and, with strict voting systems, sometimes deeply frustrating. Musicians go from one temporary contract to the next in the vain search for the security of a permanent position.” – The Strad

“Slow things drive us crazy because the fast pace of society has warped our sense of timing. Things that our great-great-grandparents would have found miraculously efficient now drive us around the bend. Patience is a virtue that’s been vanquished in the Twitter age.” – Nautilus

“For decades, publishers had confined many black romance authors to all-black lines, marketed only to black readers. Some booksellers continued to shelve black romances separately from white romances, on special African American shelves. Accepted industry wisdom told black authors that putting black couples on their covers could hurt sales, and that they should replace them with images of jewellery, or lawn chairs, or flowers. Other authors of colour had struggled to get representation within the genre at all. – The Guardian

“Every spring, thousands of hula fans descend upon the Hawaiian town of Hilo and line the bleacher seats at Edith Kanaka’ole stadium. Thousands more across the islands … watch live broadcasts on their televisions or computer screens. All these people are showing up and tuning in for the beloved Merrie Monarch Festival, … arguably the world’s most prestigious (and consistently sold out) hula competition.” – Atlas Obscura

Academia being what it is (a place where everything is contested), there has been considerable debate over what exactly qualifies as bullshit. Most of that debate centers on the question of intention. Is bullshit considered bullshit if the deception was unintentionally presented? – Pacific Standard

Crickets? Fireflies? Metronomes … and clapping: “Objects with rhythm naturally synchronize.” OK, but so what? Well, scientists are finding real-world applications of abstruse mathematical theories – for instance, “rules about how to stabilize the synchronization of power grids and more stably integrate the U.S. grid with intermittent energy sources like solar and wind.” – Quanta Magazine

“The image of a mother made to eat her children was hard to shake, and a couple of decades after its 1594 premiere, artists had already begun to appropriate — O.K., fine, cannibalize — its plot for uses comic, tragic and savagely satirical. Its blood has spattered everything from bootleg Dutch tragedies to Japanese anime to Game of Thrones. Directors have staged it with almost no gore and with nothing but gore. It has been modernized, musicalized, performed by puppets and adapted to Kabuki. Stephen K. Bannon sent it into space.” – The New York Times

There’s Slow Food. There’s Slow (Longform) Journalism. Now there’s Slow Art. To get people in the mood for slow art, Christie’s, the V&A and the Natural History Museum have been offering yoga and sound meditation baths before visitors step foot into their exhibitions. But rather than putting them in a trance, it’s all about switching on their senses. – BBC

Terry Gilliam’s The Man Who Killed Don Quixote “has to be one of the unluckiest passion projects in history: In a three-decade stretch, Gilliam, now 78, endured several financing stops and starts, a rotating cast of committed and uncommitted cast members, and a brutal flash flood that wiped out an entire set. … In interviews, those who had stayed with Gilliam on this ride could be described as the director’s own Sancho Panzas: equal parts loyal and astounded that Gilliam kept pressing on, even under the most challenging circumstances.” – The New York Times

It’s Been a Minute isn’t a comedy show like Wait, Wait, Don’t Tell Me. Says co-founder and host Sam Sanders, “We kind of trick our listeners into thinking it’s like a little fun talk party but, like, no, we’re giving you a lot of news stories. It’s still journalism. We’re still storyboarding, we’re still researching, we’re still fact-checking.” – Current

Blame evolution. “Impatience made sure we didn’t die from spending too long on a single unrewarding activity. It gave us the impulse to act. But that good thing is gone. The fast pace of society has thrown our internal timer out of balance. It creates expectations that can’t be rewarded fast enough — or rewarded at all.” – Nautilus

In fact, a set of scholars now believe, the Greeks based their music on scales and instruments like the lyre that had been developed more than 1,000 years earlier in Babylonia, from which come the oldest evidence of a heptatonic scale and the oldest pieces of music we have. Olivia Giovetti does a deep dive (with particular reference to opera). – Van

On conducting with his whole body: “My model in this is really Leonard Bernstein because he also [conveyed] how every bone of the body should express music while on the podium. Why just limit it to the arms, which is what usually people see? It’s the eyes, the eyebrows, the shoulders, the feet.” (audio) – NPR

Chip Colwell: “As a museum curator and scholar of the repatriation movement, I am stunned by the pace of these unfolding events, which seemed unlikely not long ago. I now understand that the repatriation battles are not isolated to a few museums wrestling with their colonial legacies. These clashes are fueling a war over the rights of former colonial subjects and the future of museums.” – The New York Times

It’s a $44 billion business. But recently there have been layoffs. Workers have no protection. And some parts of the workforce barely make $10 an hour. Not the picture you thought, right? – The New York Times

“Calling Bullshit: Data Reasoning in a Digital World” at the University of Washington “is not dedicated to teaching students that Fox News promotes ‘fake news or that National Enquirer headlines are fallacious. Instead, the class operates under the assumption that the structures through which today’s endless information comes to the consumer — algorithms, data graphics, info analytics, peer-reviewed publications — are in many ways as full of bullshit as the fake news we easily recognize as bogus.” – Pacific Standard

“The crime would be punishable by three years in prison and a fine of 10.5 million Australian dollars ($7.5 million), or 10% of the platform’s annual turnover, whichever is larger. Abhorrent violent material is defined as acts of terrorism, murder, attempted murder, torture, rape and kidnapping.” – Yahoo! (AP)

Susan Tallman: “The claim for af Klint as an inventor of abstract art runs into two serious problems. The first is that it doesn’t seem to match how she thought the work should function. The second is that abstraction was ‘invented’ in the same sense that the Western Hemisphere was ‘discovered.'” – The New York Review of Books 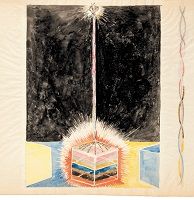