“As we grow older the balance between men and women actors never changes, but the opportunities for men somehow far outnumber those for women. As a result of this imbalance, women have become disposable in the modern theatre.”

“At first glance, theater productions seem like a good fit for the streaming-platform models established by Netflix and Hulu and Amazon, since Broadway fare appeals to a passionate niche audience that can’t always make it to New York to catch a show. But there are a slew of hurdles, including negotiations with stage unions and rights holders still fairly new to working out their positions on digital distribution, and the fact that many of the productions most likely to arouse widespread interest among viewers — “Hamilton,” “The Lion King,” “Wicked” — won’t allow a capture of an entire performance to hit the Internet until after the production has closed.”

“Stave churches are wooden houses of worship that combine the austere, peaked architecture of Christianity with the Nordic designs and motifs of a Viking great hall. … Using the same woodworking prowess that made the Vikings such adept shipbuilders, traditional stave churches were often built using nothing more that expertly crafted joints and joins, with no nails or glue.”

“Anew crop of commissions for U.S. opera houses are focusing on the home front, adapting works that are distinctly American in scope and are set in the country.” Commenters offer a few more candidates. (includes video clips)

For instance, it was once owned by an Oxford mathematics professor, and at one point Stalin had to talk Lenin out of tearing it down.

“You might not think of Lamb Chop, the adorable hand puppet that graced the appendage of world-famous ventriloquist Shari Lewis, or the impertinent wooden dummies operated by Edgar Bergan as having ancestors, but they do. One of them is a snake in a human mask. But let’s back up.”

“There are some interesting changes afoot within the Morris community as the tradition has adapted to remain relevant in modern times. Among those changes: the inclusion of women, the adoption of Steampunk aesthetics, and the blasting of Guns ‘n’ Roses.”

After a few months of “dancing” in a close embrace, Gabriella Condrea started to slowly pull away from Tho Nguyen so he could stand for a little while on his own, his posture primed and his confidence up. It took just over a year, but one day when Condrea pulled away, Nguyen looked at her and said, “Watch this,” then took three steps without support. It was the first time he had done so in 20 years.

“Developed at Google’s Zurich office in 2014 and released to the wider world last summer, Deep Dream uses artificial neural networks, a style of computing inspired by the brain and nervous systems, to learn to recognise shapes in pictures.”

“Previously unpublished documents have revealed the scale of a plot by the media mogul William Randolph Hearst to discredit Orson Welles and destroy Citizen Kane, the 1941 film about the rise and fall of the fictional newspaper proprietor Charles Foster Kane.”

“There remained little hope for the heritage site amid fears that if ISIS ever retreated, its militants would rig bombs to the ruins as they fled.”

“It’s so difficult for computers because translation doesn’t—or shouldn’t—involve simply translating words, sentences or paragraphs. Rather, it’s about translating meaning. And in order to infer meaning from a specific utterance, humans have to interpret a multitude of elements at the same time.”

“The results are a devastating rebuke to the power of mainstream American critics at a time when many newspapers have already outsourced their reviews to wire services and the rise of bloggers has de-professionalized the practice of assessing a film’s attributes and demerits.”

“Why this apparently overwhelming, unquenchable urge to argue that box office receipts prove the irrelevance and impotence of criticism? Could it be that the movie business feels defensive, maybe even ashamed, of peddling so much profitable dreck, and—whatever the numbers may say—a critic’s reproaches still have the power to sting?”

“Syrian troops on Sunday regained Palmyra, and for the first time since May 2015, when ISIS took the city famed for its 2,000-year-old temples and Greco-Roman ruins, the extent of damage inside the UNESCO World Heritage Site became apparent. ‘We were expecting the worst,’ Maamoun Abdulkarim, Syria’s antiquities chief, [said]. ‘But the landscape, in general, is in good shape.'”

“Over the years, libraries have fined patrons for not bringing back books and offered no-questions-asked return periods. They’ve published the names of book scofflaws in local newspapers. They’ve paid personal calls on people who hold onto books past their due dates, and even sicced the police on particularly recalcitrant readers. And they still don’t really know how to get their books back.”

The Old and the New Dancing Together

In a program essay by Susan Yung for the Paul Taylor’s American Modern Dance season (through April 3), guest choreographer Doug Elkins mentions that Taylor’s Esplanade was the first dance he ever saw on PBS’s Dance in America and … read more

Once in a lifetime

I went to see the Paul Taylor Dance Company (it’s changed its name, but I can’t get used to the new one) at Lincoln Center on Saturday afternoon. Regular readers of this blog may recall … read more

For the last few years, the Indianapolis Museum of Art has, it seems to me, been on a crazy trajectory. As soon as it does something smart, it turns around and undermines itself. Now it… … read more

The Strange Case of Orwell’s Typewriter

My curiosity was aroused by this sentence: His manual typewriter — rather suitably, in the light of his faint anarchist leanings — was later bestowed by Sonia on the 1960s hippy-radical news-sheet, the International Times.&hellip; … read more

“We did five performances and right from the first one you could actually see what was happening with the public,” he says. “And as we say in the theater, ‘What the public demands, you give.'”

“There’s something slightly perverse about a play that asks you to attend simply on faith and not to reveal its secrets, because most any arts marketer will tell you that word of mouth is essential for sales.”

She works on everything from West End plays and musicals to opera at the Met and Covent Garden to rock stars’ arena tours to the opening ceremony of the Rio Olympics. Says one director, “[She] doesn’t design plays. Or, at least, she doesn’t design the locations in which they’re set. Instead, she designs the ideas, the thought structures, the systems in which the characters operate.” 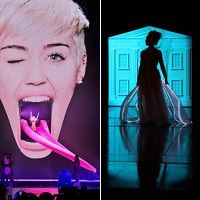