“Noam Chomsky is the man who revolutionised linguistics. Since he wrote “Syntactic Structures” in 1957, Mr Chomsky has argued that human language is fundamentally different from any other kind of communication, that a “linguist from Mars” would agree that all human languages are variations on a single language, and that children’s incredibly quick and successful learning (despite often messy and inattentive parental input) points to an innate language faculty in the brain. These ideas are now widely accepted.”

“Belief without doubt would not be required by an all-loving God, and it should not be worn as a badge of honor. … Anyone who does not occasionally worry that he may be a fraud almost certainly is. Nor does the worry absolve one from the charge; one may still be a fraud, just one who rightly worries about it on occasion. Likewise, anyone who does not occasionally worry that she is wrong about the existence or nonexistence of God most likely has a fraudulent belief.”

Dennis Lim: ” The shock of the new fades by definition, but if it has hardly done so in the case of Blue Velvet, that may be because its tone remains forever elusive. To peruse the early reviews is to sense the emergence of the slipperiest of sensibilities, one that no one quite knew how to talk about. To encounter or revisit the film now, decades later, is to realize that we still don’t.”

“Women in one creative role, let alone four, are still relatively rare on Broadway. Over the last 41 seasons of Broadway musicals, only about 1 in 10 directors, authors or composers, and 1 in 4 choreographers, have been female. By contrast, 255 musicals, or 52 percent, have had four men in their top creative roles.”

“And then I looked at the empty seat next to me and it dawned on me. My seatmate for the next six hours was going to be the man whose hair style I had tried to copy through most of high school, with much hair mousse and little success. The man I wanted to be if I ever grew up, because he made people laugh while he told them the truth, which, back in the late eighties and early nineties, was still a novelty.”

“The new job’s best perk: weekends. She and [husband Victor] Barbee will work Monday through Friday for the first time in their professional lives. (ABT’s workweek is Tuesday-Saturday, meaning Sunday is the only day the family has together.) Their workdays will end at 6 p.m., rather than at 7 with ABT. The two [currently] travel separately some 10 weeks of the year – she to audition students, he to accompany ABT on tour – meaning more splintering of the family.”

“They wanted me to tell the public how they showed love. How they sacrificed for each other. How they took care of a disabled homie, gave his family money after he was crippled by a gunshot blast. Or how they would pay for his funeral if he was killed. How they would discourage younger siblings from joining the gang. How they stuck by each other. They had their own code of love. I promised to write about it.”

“The New York socialite and amateur opera singer Florence Foster Jenkins was a popular joke in her own time, but more than 70 years after her death she has earned her place in the cultural pantheon as the inspiration for at least two successful stage shows, and this spring, two rival films.”

“There was an inescapable sense that they’d be letting down more than themselves if they failed. An unfair pressure to put on anybody. Also an exciting one, for the people involved. I kept thinking of one of those movies where they’re trying to lift something out of the desert, some buried archaeological monument, and everyone’s wondering if the ropes will hold. Maybe it will fall and shatter.”

“From the moment Jane Eyre was published in 1847 they have exerted an almost hypnotic pull: where other literary sensations flash bright, then fade to earth, the Brontës endure, their stories adapted again and again for both stage and screen.”

“Dr. William Schaffner, a professor of preventive medicine at the Vanderbilt University School of Medicine, said on Saturday that he believed ‘the entire board as well as Mr. De Niro have learned a lot in the last several days.'”

‘Little Red Riding Hood set off through the forest to visit her grandmother, just like in the original. But the Big Bad Wolf did not scare her this time, because she ‘felt the reassuring weight of the rifle on her shoulder.'” 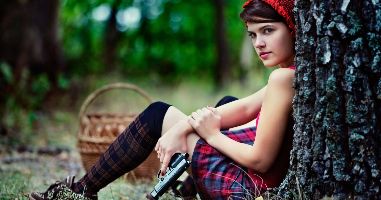