This season, the Washington Wizards introduced the Wizdom, a 20-member squad, all women 50 and older, who dance during timeouts. The crowd loves them. And a dozen other teams in the league have similar squads of older adult dancers. – The Washington Post

Josephine Livingstone: “I am not a foodie. I don’t even know the difference between a meuniere and a mirepoix. But from the outside looking in, it’s clear that foodie culture is roiling with a new awareness of social politics, undermining some of that culture’s unspoken tenets: that taste and pleasure are neutral, universal concepts; that the kitchen is an apolitical zone. Being a foodie now, in 2019, requires thinking with more than your tongue.” – The New Republic

There’s a digital renaissance underway in the Eternal City and it is helping to shed a light on the past – quite literally. From video projections cast upon ancient walls and multimedia light shows to virtual reconstructions revealed through 3D visors, technology is being used to help tell the story of Rome in a more concrete and compelling way. – Forbes

“The daughter of a diplomat, born in Copenhagen in 1949 and raised in Buenos Aires, de Guébriant was introduced in 1975 to the artist’s daughter and archivist, Marguerite Duthuit, and became her assistant, working closely with her on Matisse catalogues and exhibitions. When Duthuit died in 1982, De Guebriant succeeded her as the only official specialist for Matisse’s work.” – The Art Newspaper

Caryn James: “A nude scene! Abortion; birth control; prostitution! In the silent-movie era, Lois Weber’s films were shockingly ahead of their time – and also immensely popular. She wrote, directed, produced and sometimes starred in her films, and in 1916 was the highest paid studio director in the US, man or woman. She pioneered techniques including split screen and double exposure, for a time ran her own studio, and along with Alice Guy-Blach​é was one of the two women who contributed the most to cinema at its start. But she died alone, broke and nearly forgotten in 1939. What happened?” – BBC

There is of course a long history of interaction between the British and Irish theatres, and this looks certain to continue into the future — however Britain’s relationship with the EU (and thus with Ireland) evolves in the years ahead. – Clyde Fitch Report

“The apocalypse can facilitate a different kind of social world,” says scholar Caroline Edwards. “That might seem horrifying to the protagonists, but the writer is posing a serious question: might this new world be better?” Sumit Paul-Choudhury digs into this idea. – BBC

The personal stories tell of unpaid hours; unsustainable workloads; limited prospects for progression; poor pension provision; exploitation – and self-exploitation; undervalued qualifications; volunteers taking formerly paid positions; the need for financial support from family members; second jobs in other sectors; huge differentials between senior and junior staff; freelance rates that have been stagnant for a decade; and experienced and highly qualified workers leaving the sector altogether in order to be able to pay the rent. – Arts Professional

“Arcadia’s business turns the traditional publishing model on its head. Big New York publishers are looking for the next blockbuster to sell 2 million copies across the English-speaking world in a month. Arcadia wants to find a book that will sell 1,000 copies this year in, say, McMullen Valley, Ariz.” Says the company’s CEO, “The books are completely evergreen. Once you publish them, they sell forever. So even though the initial numbers are modest, you’re creating a kind of annuity.” – The Washington Post

Just since the beginning of this year, Spotify has bought podcast producer-distributor Gimlet Media for $230 million and a $100 million startup called Luminary is developing a paid-subscription-only lineup of 40 new podcasts. As one exec said, “The capitalists are here!” Yet, asks Boris Kachka, “What distinguishes a boom from a blip — the beginning of a golden age from a spike of irrational exuberance?” – New York Magazine

Adam Sternbergh: “When you first heard about podcasts, do you remember how excited you weren’t? Do you recall the first person who said, ‘Did you know you can now download audio files of people talking?’ … They’ve spent a decade in a state of perpetual arrival, [but] they’re here. What’s more, these humble chunks of audio have emerged as the most significant and exciting cultural innovation of the new century.” – New York Magazine

Freelancers in the arts hit the instability jackpot. They enter a market with no money and ask for the scraps, billing for what the organisation can afford, not what the job is worth. Unlike employees, they’re never paid for the in-between times; they sometimes lose money in preparing for and delivering jobs, which employees don’t. And it’s probably the only industry in which taking on a PhD just to live off an associated scholarship – which one respondent to the ArtsPay survey reported doing – is an understandable career choice. – Arts Professional

The shock of Vietnam made conventional art forms such as painting and sculpture look inadequate. Its reverberations inspired a rapid expansion of the possible forms art could take and a search for new audiences. Public performances, video, installations, land art and agitprop all flourished during the war. – Washington Post

There are no further meetings between the sides scheduled at this time. CSO President Jeff Alexander said that after no progress was made after lengthy sessions on Friday and Saturday, both sides agreed it would be “good to take a pause” in negotiations. On a small note of optimism, Alexander said that “there is room for movement” on the salary element of the contract. The CSOA is currently offering a 5% increase over a three-year contract while the union seeks a 12% increase over the same period. – Chicago Classical Review

Even as I stood amid the morning rush at the Prado’s entrance, scanning a floor plan with the nearly 120 galleries I would navigate, I never expected I’d be in the museum for seven hours. In fact, I envisioned myself home by 2 p.m., enjoying some leftover albondigas(meatballs) and a siesta before making the school run to fetch my kids at 4 p.m. – The New York Times

The company deems a community unsuitable for Today In if it cannot find a single day in a month with at least five news items available to share. But the social media giant said it has found that 40% of Americans live in places where there are not enough local news stories to support it. – The Guardian

Last fall, Swiss researchers exposed nine wheels of Emmentaler in an aging cellar to various types of music: classical (Mozart’s Magic Flute), rock (Led Zeppelin’s “Stairway to Heaven”), techno (Vril’s “UV”), hip-hop (A Tribe Called Quest’s “Jazz (We’ve Got)”) ambient music (Yello’s “Monolith”), and, as controls, steady high, medium and low tones and silence. All were on nonstop loops, with mini-transducers transmitting the sounds directly into the cheese wheels. After six months, the wheels were taken out and taste-tested — and here are the results. (So why was the classical music used Mozart instead of Mahler, Monteverdi, Stravinsky, or Steve Reich?) – Smithsonian Magazine

It survived bankruptcy, the threat of closing and the death of its charismatic founder. In 2014, it became a nonprofit. And now, after 30 years, with more than 132,000 titles — many on VHS, laser disc and DVD — it is as much a cultural warehouse as anything else. – New York Times

Sandra Newman looks at the 126 Shakespeare sonnets (out of a total of 154) addressed to the Fair Youth, at other sonnets and love poetry of the time and place, and at what Shakespeare’s contemporaries said and wrote about male-male sex and love (especially in the theatre). Then she applies Occam’s Razor. – Aeon

“In the space of a few short years, the Boston-born, Southern California transplant (born Richard Anthony Monsour) had merged the laid-back, sun-blasted lifestyle of the surf scene with a blistering rhythm of rockabilly and early rock-and-roll. As the mad scientist behind what was dubbed ‘surf rock,’ Dale was, in the words of a 1963 Life magazine profile, a ‘thumping teenage idol who is part evangelist, part Pied Piper and all success.'” – The Washington Post

As part of the City’s agreement to let the Met charge non-New Yorkers a mandatory admission fee, the museum is to give the City a portion of the new revenues for grants to other organizations. Now the City’s Department of Cultural Affairs has announced that it will distribute $2.8 million of those revenues to 175 groups throughout the five boroughs. – ARTnews

“The Teatro alla Scala in Milan on Monday decided to return more than three million euros in funding to Saudi Arabia, amid growing criticism that Italy’s premier temple of music should not accept money from a country with a jarring human rights record. Mayor Giuseppe Sala said the theater’s board of directors had deliberated over the issue and ‘unanimously decided to return the money.'” – The New York Times

Anyone with an Instagramaccount, a fashion magazine subscription or an interest in social activism is ultimately engaging with club culture. Nightlife is like an angel investor in pop culture, silently incubating grassroots movements and social moments, and since the first iterations of the disco, clubs have been a breeding ground for cultural experimentation. – The Guardian

I’ve been away for a few weeks, but I don’t want you to miss notice of an excellent exhibition at the Kimbell Art Museum: The Lure of Dresden: Bellotto at the Court of Saxony, which runs until Apr. 28. – Judith H. Dobrzynski

Is it mere coincidence that First Lady Melania Trump tweeted a shoutout to the National Endowment for the Arts on the same day that her husband released a FY2020 budget proposal that would eliminate the NEA and NEH? – Lee Rosenbaum

Keith Patchel, a New York-based composer and producer, has created a free online/mobile application called Plinkout, which he is touting as “the easiest way to teach anyone,” especially kids, how to play an instrument as well as how to learn “the core cognitive ideas of music.” – Jan Herman

The iconic Trocadero is going out in May, according to owner Joanna Pang, who says (and this is depressing as heck) “The landscape of the business has changed in the last five years. It’s harder now to be an independently run venue — it’s a different world. There are bigger rooms run by bigger concert corporations.” That is, Live Nation. – Variety 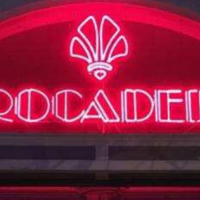