“I think of it a little bit like if a house was burning, and you had the opportunity to run in and save a piece of humanity,” says Industry founder Yuval Sharon. “That’s what we’re doing.” – Los Angeles Times

It seems all too obvious to compare flamenco virtuoso/a Manuel Liñán’s all-bio-male show Viva! to Les Ballets Trockadero de Monte Carlo. But, writes Marina Harss, the dancing here is quite traditional, “less satire than declaration of love for flamenco, pure and simple.” – The New York Times

“[She] won the top directing prize at the Cesars in 2000 for her movie Venus Beauty Institute, a romantic comedy starring Nathalie Baye and Audrey Tautou that recounts the quest for fulfillment of three female employees in a Parisian beauty parlor. After that, she became a prominent figure in the fight against sexism in the French film industry.” – Yahoo! (AP)

SCAD (Savannah College of Art and Design) Hong Kong, which has been in operation since 2010, has a $4 million financial deficit due to low enrollment. The tuition fee of $38,440 per year for full-time undergraduate students is considered unfeasible for most local students, while students from mainland China who would be able to shoulder the financial cost of the institution often prefer to go abroad for their educations. The school only recruited eighty-eight students, or 40 percent of its target, in 2010—last year only half of its target, 156 students. – ArtForum

“We have been forced to make the unthinkable decision to lay off the vast majority of you in the coming few days. Many people have spoken publicly demanding we pay our employees and extend health insurance for the duration. No one can possibly know how much I wish I could make that happen. We are simply not that kind of business – we run on duct tape and twine on a daily basis, every day trading funds from one pocket to patch the hole in another.” – Powell’s

“With his tousled dark hair, roguish smile and boxer’s physique, Mr. Whitman was a half-century staple of film and television, appearing in studio blockbusters and John Wayne epics as well as exploitation films and horror schlock. … [He] earned an Oscar nomination for his portrayal of a child molester in The Mark.” – The Washington Post

“In a surprise announcement today, Macmillan abandoned its controversial embargo on new release e-books in libraries, effective this week. ‘There are times in life when differences should be put aside,’ reads a brief memo from Macmillan CEO John Sargent addressed to librarians, authors, illustrators, and agents.” – Publishers Weekly

It’s not just Americans broadcasting their living spaces to the world in the hopes of finding digital company. In the midst of a pandemic, kids with smartphones and wireless access and unlimited free time are showing us what a room looks like globally. American teenagers are watching TikTok videos from countries that are two or three weeks ahead of the United States in quarantine measures, peering into the life they will soon be living. – The Atlantic

Michael Kaiser: “For many, it is a lack of clarity on the duration of the crisis that causes the most anxiety. Should we proceed with rehearsals for a new production scheduled for May? Do we issue next season’s subscription brochure? Should we move forward with our capital campaign? Will our reserves outlast the downturn, or are more drastic measures necessary? These are some of the sensible and challenging questions we have heard from arts leaders across the nation.” – DeVos Institute

Five days ago, the largest opera company by budget in the United States released a statement to the press that all rehearsals and performances through the end of the month would be cancelled due to Coronavirus.
Multiple soloists currently engaged at the Met confirm they found out about their lost work via a Tweet. – Middle Class Artist

“Shows are drastically scaling down their studio time, production teams are increasingly shifting to remote workflows, public radio stations are postponing their pledge drives, and independents are bracing for hits to their business models. Here, a look at how the podcast world is handling the crisis.” – Vulture

LAUSD curriculum specialists and PBS SoCal/KCET were in a programming war room, mapping out priorities by grade, and identifying shows inside the TV stations’ library that might match up. Also, San Francisco PBS station KQED was brought in, and took the lead in developing an online service to match the broadcast service being developed in Los Angeles. – Variety

These virtual tours take you right inside some of the world’s most iconic institutions. Been putting off that trip to Amsterdam to explore the Van Gogh Museum? Here’s your chance to take it all in. Dreaming of a trip to Paris that includes taking in the Louvre? You can do that, too. – Yahoo!

Marina Harss talks to four dancers from across the country about how they’re staying in shape and in touch despite being more or less trapped in their houses. – The New York Times

Venetians are posting photos to the Facebook group Venezia Pulita (Clean Venice), saying that they’ve never seen the water in the canals so clear. It’s not that they’re suddenly far less polluted than before, says the mayor’s office: the lack of boat traffic means that no sediment is getting stirred up from the bottom. – CNN

There are a lot of small regional organizations on this list who are stepping up despite finances that are precarious even in good times, but the only big-name company there is Houston Grand Opera. And though Lincoln Center Theater is included (for its now-cancelled production of the new Ricky Ian Gordon-Lynn Nottage opera Intimate Apparel), the Metropolitan Opera is definitely not. (Across the Atlantic, English National Opera will honor at least one month of contracts.) – The Middle-Class Artist

In addition to being the handsome announcer and sketch actor on Burnett’s show and the foil to Lynda Carter’s superheroine, he was the first-ever centerfold for Playgirl magazine and, later in life, launched a successful business renting custom trailers for actors to retreat to during movie and TV shoots. – Yahoo! (AP)

The replica Elizabethan theatre in the Shenandoah Valley normally thrives, in the usual hand-to-mouth way, with a mix of school groups and out-of-town visitors. Now both are gone indefinitely. Peter Marks traveled to Staunton, Va. to see how the ASC is coping. – The Washington Post

Of the dozen or more such articles that we’ve seen so far, this one from David Patrick Stearns is our favorite so far — not only because it offers a lot of options, but also because of his sense of humor and compassion. – WQXR (New York City)

Plagues functioned as a setup for an even more crucial theme in ancient myth: a leader’s intelligence. At the beginning of the “Iliad,” for instance, the prophet Calchas – who knows the cause of a nine-day plague – is praised as someone “who knows what is, what will be and what happened before.” This language anticipates a chief criticism of Homer’s legendary King Agamemnon: He does not know “the before and the after.” – The Conversation

As dance, music and opera companies seek ways to stream performances online; dance teachers hold class and dance parties on Instagram live; university dance programs unveil plans to move curriculum online; and pioneering choreographers seek ways to make virtual dances amidst this period of social distancing, an uptick in innovative online dance experiences is imminent. But it is impossible to predict now what the overall economic impact of COVID-19 will be on arts and culture—an $800 billion U.S. industry. – Dance Magazine

The British Museum on Tuesday announced that 1,311 finds which are defined as treasure had been found by members of the public across England, Wales and Northern Ireland in 2019. They also included an iron age drinking set, a solid gold bronze age arm ring and a coin which helps tell the story of Carausius, a usurper emperor who in 286AD broke Britain away from Europe, in an adventure which ended badly. – The Guardian

Charles McNulty: “I’m sure I’m not the only writer who fantasizes about retreating to a country house with nothing to do but curl up by a fire beside a mountain of Dickens and Dostoevsky. But as the coronavirus pandemic upends our civilization, I’m urging myself to jump off the self-improvement treadmill.” – Los Angeles Times

Jazz doesn’t want to stay home and chill, so members of the Jazz Journalists Association have launched JazzOnLockdown: Hear It Here, a series of curated v-logs featuring performance videos of musicians whose gigs have been postponed or cancelled due to coronavirus concerns. – Howard Mandel

I doubt it will surprise any of you to learn that I’d been growing increasingly worried about the inability of Mrs. T’s doctors to rouse her from the medically induced coma into which she was placed after her double-lung transplant surgery two weeks ago. – Terry Teachout

The company will also make movies that are currently in theatrical release available on-demand beginning as early as Friday, starting with the Elisabeth Moss horror film “The Invisible Man,” the satirical thriller “The Hunt” and Focus Features’ period comedy-drama “Emma.” – Los Angeles Times

“We’re going make sure we protect our people, but we need to keep the arts and the music going. That’s what we’re going to do. That’s why we’re here.” – The Guardian 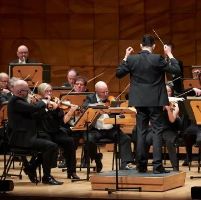