In an essay that won Brown University’s Barbara Banks Brodsky Prize for Excellence in Real World Writing, undergrad Jamila Wilkinson writes about how, as a young girl, she studied for years at Ailey’s school and danced in his masterpiece with the adult company several times — and how, later, she came to realize why she couldn’t connect with the work. – Guernica

“In the early 1920s, a secret file scandalized white women reformers in the United States. It was known as the Secret Dance File, its contents too shocking (and titillating) to print or even send in the mail. … The file contained frank descriptions of Pueblo dances that depicted and parodied sexual acts … [and] it made a case for banning [those] ceremonial dances on the grounds that they were immoral and performed only for pleasure.” – JSTOR Daily

Ma: “It’s never art for art’s sake, because even if I do it for myself in my head, I have an ideal. I’m actually trying to take something — a construct, a concept, a theory — and then I want to make it visible, I want to make it audible, I want to make it tactile. I want to make it felt.” Borda spoke of the New York Philharmonic’s efforts to engage with social issues, including gender equality. Recognizing that “all the music we play was written by men,” the organization is launching an initiative next year — the 100th anniversary of the 19th Amendment, which gave women the right to vote — to have 19 women write major world premieres for the orchestra. – Harvard Gazette

Catherine Brown: “At the risk of taking too-seriously an award of which the keynote is not seriousness, there are several problems involved in this that are worth considering. One is the implicit hypocrisy that the award has brought great publicity to its parent magazine because of the very fact – which the award ostensibly disparages – that sex sells.” – IAI News

“Arcadian Broad, who has a national following as Orlando Ballet’s best-known dancer, will depart the company next month. The ballet company declined to renew his contract, as well as that of his fiancée, fellow dancer Taylor Sambola.” Said the company’s executive director, “We’re grateful for Arcadian’s talents, and wish him the best as he spreads his wings. Now it’s time to bring new voices, new ideas and ballets with widespread critical acclaim to Central Florida.” – Orlando Sentinel

It is one thing to share information about philosophy and another to offer non-philosophers a way of participating in the activity. Public philosophy aspires to liberate the subject from its academic confines: to put philosophy into action. Is that a good thing? I’m not sure it is. – The Point

Compare Amazon’s ability to deliver what you want, how you want it, and when you want it, to that of the average college or university. Or even to the growing number of online universities, hybrid universities… and especially to the “traditional” institutions that offer online learning options. Amazon would crush those folks. – Inc.

Born in Kalaba, Nigeria, in 1963, Enwezor studied political science in the U.S. He entered the contemporary art world by founding a magazine focussed on African art in 1994. He curated the Johannesburg Biennale in 1997: other credits include the 2006 Seville Biennial and the 2008 Gwangju Biennial. – The Art Newspaper

China now has around 5,000 museums, of which around 1,500 are privately run. Asked why they opened private museums, the collectors canvassed are candid. “It was good for my collection. It is easier to acquire high-quality works as an institution.” – The Art Newspaper

Rather than a vision of the future, Hudson Yards takes a snapshot of the concentrated-wealth present. It is the physical expression of the tensions between the developer’s focus on moneymaking, the complications of the site, and complex public agendas. Hudson Yards is an untidy collage of all the forces that have acted on it. – CityLab

Alumni from the academy, which began in 1972, have gone on to American Rep, City Ballet, and the National Ballet of Canada – but the university is claiming low enrollment means it’s closing time. – Louisville Courier-Journal

Tracy Letts, who was one of the performers in playwright Nassim Soleimanpour’s Nassim, didn’t get a rehearsal ahead of time (no actor does), and he was a bit worried he might cry while acting – because, he says, “in the time we’re living in right now, most people I know walk around trying not to cry most of the time. And the show touches on a lot of things — storytelling, language, transcending borders, connection — and connection with anybody is moving.” – The New York Times

Dang, Chicago. Here’s the story’s start, when actors get to the theatre, but the set doesn’t: “The cast arrived at the theater and got into costume. No wrestling ring. It’s 5 p.m. and getting dark. Still no ring. Calabrese and Mayberry started looking for a plan B, and fast. ‘We gotta do something,’ Calabrese said. A U-Haul truck was a rented, a ring was found in Villa Park — delivery not included — about an hour away in evening traffic. In the rain.” (Now wait for the part where the set doesn’t fit into the elevator.) – Chicago Tribune

Yes, this happened (will it lead to new fundraising opportunities for symphonies?): A musician’s boyfriend and the DSO, working together, “created a fake networking event for young musicians on March 10 at Orchestra Hall. After a few days, Santa Cruz and a friend RSVP’d for the event.” – Detroit Free Press

The CBS Corporation’s directors agreed to a payout of $1.25 million for an investor lawsuit over money paid to Redstone after his health deteriorated in 2014. Is this the last lawsuit around Redstone, his daughter Shari Redstone, Viacom, and CBS? Maybe. – Bloomberg

Iglauer, a staff writer at The New Yorker, went to Canada for an assignment about the salmon fisheries of British Columbia, and she fell in love. She was also a war correspondent and, between the war and Canada, one of the first to write about the health effects of air pollution. – The New York Times

And yes, it’s in Captain Marvel too: White superhero, POC sidekick. To be fair, “The characters would probably balk at the classification of ‘sidekick.’ Yet they’re designated by the films as such, by virtue of their stories ultimately working to support the main character’s arc. All of them exist to help the lead work through some issue or trauma and provide logistical backup.” – The Guardian (UK)

In a new movie, a little girl imagines a roller coaster (and an entire amusement park) into existence. The glamor and thrills of amusement parks, and roller coasters in particular, can lead kids’ imaginations in exciting ways – and maybe can lead those kids to leave their towns and families and wind up in new, unknown, sometimes scary (but thrilling) terrain. – The New York Times

One of his accusers “said that this case was ‘always the word of a low-level assistant and a perceived eccentric woman of color against an extremely powerful and wealthy TV personality,’ so she was not at all surprised by the news.” – The New York Times

Though the movies that won awards were serious, the festival “has turned into something of a testing ground for the hit potential of Hollywood comedies.” – The New York Times

Well, for one thing, it could encourage actors (stage managers, lighting crew members, etc.) to job-share. Also, with professionals, idea: “We need to make sure we are not rehearsing into the evenings and we don’t need to rehearse every night.” – The Stage (UK)

There are spoilers in this article, just FYI – but not in this excerpt: “In addition to [experienced cat actor] Reggie and another experienced animal actor, Archie (yes, they’re named after Archie Comics characters), Brauner found two more orange tabbies, named Gonzo and Rizzo in a nod to the Muppets, at a shelter. Each one had a specialty.” – The New York Times

James Gunn’s firing from the Marvel movie Guardians of the Galaxy 3 was controversial because Disney fired him when “two far-right provocateurs, Mike Cernovich and Jack Posobiec, threw a spotlight on the [offensive tweets] — written between 2009 and 2012 — after Mr. Gunn harshly criticized President Trump online.” – The New York Times

Stevenson was among many other arts leaders in Britain who said Brexit was a terrible idea. She added, “I spent last year filming a series called Riviera, which had a French crew, Belgian director, German camera man, English, Swiss and American casts, and it’s particularly those sorts of things that are going to be much harder.” – The Stage (UK)

Merwin “was one of the most highly decorated poets in the nation, and very likely the world. He was the United States poet laureate from 2010 to 2011; won two Pulitzer Prizes, a National Book Award and a spate of other honors; and was lauded for his volumes of prose and translations of poetry from a Babel of languages.” – The New York Times

The show, called The Pinks and the Blues, “developed by the activist troupe Merak, triggered intense scrutiny from local authorities who saw it as a dangerous and subversive activity promoting ‘hatred against men and non-traditional family relations.'” The teens in the theatre troupe were also questioned by police. – Global Voices

Oh yes, there is such a thing: it’s run by Science magazine and the American Association for the Advancement of Science. And this year’s winner, Superconductivity: The Musical! by (and starring) University of Victoria physics researcher Pramodh Senarath Yapa, is about the formation of electron pairs in metals. (You can watch all four of this year’s category winners here.) – Forbes

Says Alexander Neef, general director of Canadian Opera Company, about Christine Goerke, “People can’t get over the sheer power of the voice — and I don’t mean only the volume. … It’s not only that she hits all the notes and she hits them powerfully. It’s that there’s always an element of storytelling that really allows her to connect with the audience.” – The New York Times

The ensemble Zohra, named for the ancient Persian goddess of music, was created five years ago for the female students at the Afghanistan National Institute of Music, itself founded only in 2008. “The music performed is a combination of traditional Afghan music and western classical. For instance, their new arrangement of ‘Greensleeves'” — made for its tour of England — “contains attractive new instrumentation probably not envisaged by Ralph Vaughan Williams in 1934.” – BBC 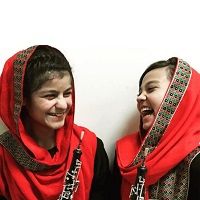