A client of Sol Hurok, she sang the major Italian dramatic roles at Europe’s leading opera houses, though much of her work at the Met was as a cover, going onstage at short notice. Her career ended abruptly in late 1979 when she contracted a severe case of Bell’s palsy. – Opera News

The work, a photograph of a figure in a rock, had disappeared, “loaned out to curator Rebecca Ballenger for a traveling exhibition from 1983 to 1984, but allegedly not returned. A Georgia man, Edward Meringolo, allegedly bought the work from Ballenger last year before consigning it to Sotheby’s, according to court papers.” – The New York Post

North American audiences are not staying away from theaters amid virus concerns, according to the weekend’s box office numbers. Disney and Pixar’s “Onward” topped the charts as expected and the Ben Affleck basketball drama “The Way Back” also opened normally. – Washington Post

After Hachette canceled its original secretly arrived at plan to publish Allen’s memoir, the horror writer tweeted “The Hachette decision to drop the Woody Allen book makes me very uneasy. It’s not him; I don’t give a damn about Mr. Allen. It’s who gets muzzled next that worries me.”
That, not surprisingly, did not go over well. – The AV Club

Why? Because they’re in city-owned buildings, and “San Francisco Mayor London Breed announced on Friday, March 6, that War Memorial and Performing Arts Center venues, including the Louise M. Davies Symphony Hall, will be closed for all public events for the next two weeks over fears of the rapid spread of COVID-19.” – San Francisco Chronicle

Author Rachel Vorona Cote: “Despite my best efforts, I am not chill, and will never be chill—I possess only meager crumbs of that coveted asset. So, I muddle on as best I can. Reading is a safe harbor, and it is also my pressure valve.” So she’s got a few recs for all of us who might be finding ourselves with more reading time (and more anxiety) than usual right now. – The Rumpus

What if you just looked away instead? Another radical idea from Great Britain. –The Guardian (UK)

Cathal McNaughton was returning to Delhi after winning a Pulitzer Prize for his photography of desperate Rohingya refugees fleeing Myanmar. “Without explanation, the Indian authorities escorted him back to the plane he’d flown in on and marched him down the aisle to his seat. Before he was fully aware of it, he found himself flying back to Toronto. His job, his apartment, his friends, his possessions: all were left behind in Delhi. McNaughton’s life, as he had known it up until then, had disintegrated.” Now he doesn’t even own a camera. – The Irish Times

Basically, access to tech could become more equitable if the conferences go online. “There are developers across the U.S. and around the world who get shut out when the conferences get sold out. Even more of them simply can’t afford the admission fee (last year’s WWDC was $1,599) and travel expenses required to spend time in the Bay Area or Seattle.” – Fast Company

Seriously, this book has a lot of endings. – Sri Lanka Mirror

Picture doing this job: “Alicia Rodis walks onto set in New York with a mission: to oversee the shooting of a very complex – and daring – group sex scene for a TV series on a major US network. She’s there to make sure the director observes the intimacy boundaries set by each of the 30 actors taking part. She keeps track of the conditions of their consent on a big spreadsheet, to make sure everyone is comfortable when the camera rolls.” – BBC

Karen Russell: “When I fixate on this math, I begin to have the panicked sense that I gave up time with my son to delete three paragraphs; suddenly writing badly feels like stealing from him. This is obviously not a healthy way to approach creative work, or a pressure that yields good fiction.” Way to go, USA! – Wealthsimple

Chris Emile does DIY dance all over LA, bringing in audiences who normally might stay away from spaces like museums, or from traditional dance stages. He says, “It was really important for us to show people of color in our performances and just be physically closer to the audience, because we felt that was the way to get people impacted and get people involved in what we were doing.” (It’s working.) – Los Angeles Times

An exhibition that covers 1000 years is going to have some unknown artists, but in addition, “native women’s art was usually anonymized and identified by tribal affiliation when exhibited in museums, says co-curator Jill Ahlberg Yohe. ‘This was a Nez Perce object, or an Apache dress,’ she explains by way of example.” But the names of contemporary Native artists will live on. – NPR

Despite the issues of the past ten years – forest fire smoke, some ugly moments in the town between a small business owner and some company members, not to mention that beam collapse in 2011 – the Oregon Shakespeare Festival seems to be thriving. New AD Nataki Garrett says, “‘I’ve never been to a theater where people move to a city to be closer to the theater’ … She’s talking about the passion and dedication of the festival’s nationwide audience, and about inheriting the leadership of a company that can inspire fans to not just buy tickets but rent U-Hauls.” – Oregon Artswatch

And not just because thousands of partying music fans are heading their way – or rather, yes, because of that, and the potential for all those possible carriers of COVID-19 to be in one hot, sweaty place, together. – Los Angeles Times 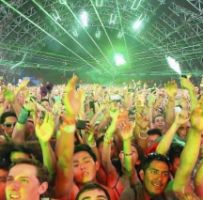