Often described as “Instapoets”, there are several writers sharing short fragments online to enormous followings. The biggest of these audiences belongs to 26-year-old Rupi Kaur: the author of two poetry collections, she has 3.5 million Instagram followers and has received by far the most media attention of any Instapoet. On her Instagram account, she alternates beautiful pictures of herself in elegant outfits with short poems written entirely in lower-case; many young, attractive poets have followed this winning template. – New Statesman

The key to making the most out of small talk, according to Harvard researchers, is to simply ask the other person follow-up questions. In a series of experiments, researchers analyzed more than 300 online conversations and found that those who were asked more meaningful follow-up questions (a.k.a. questions that aren’t “how are you?” or “what do you do?”), found the other person much more likable. – CNBC

“We have heard stories about people finding the confidence to get their first ever job or making new friendships with people from a different generation, area or culture who they didn’t think they’d ever otherwise have met. And even, in one case, suddenly finding their chronic pain causing them much less of an issue. Most common of all, perhaps, was a shared sense – that audience members also spoke about night after night – of feeling more connected to their home and their city than they had ever felt previously.” The Guardian

It’s still obvious to even the most casual viewer that Netflix hates movies, because they won’t offer their viewers something that theaters, LaserDiscs, videotapes, DVDs, Blu-rays, and even Mutoscopes offered as a matter of course: the ability to watch a film from the first frame to the last.  – Slate

Composed in 1924, the ‘Andante’ melody had originally been scribbled by Elgar on a sheet of manuscript paper, which he signed clearly with his name. But for more than a century, it was hidden within the pages of a small black autograph book once owned by Lydia Tabb – a Barnardo’s charity fundraiser. – Express and Star

If they hadn’t found each other in the New York art scene, the players involved could have met on a Spike Jonze film set: a computer scientist commanding five-figure print sales from software that generates inkjet-printed images; a former hotel-chain financial analyst turned Chelsea techno-gallerist with apparent ties to fine-arts nobility; a venture capitalist with two doctoral degrees in biomedical informatics; and an art consultant who put the whole thing together, A-Team–style, after a chance encounter at a blockchain conference. Together, they hope to reinvent visual art, or at least to cash in on machine-learning hype along the way. – The Atlantic

Marcello Angelini of Tulsa Ballet: “I think the current system for ballet companies robs dancers of their edge, whereas in Broadway, you need to remain marketable all the time. When a show opens, nobody knows how long it will run, and there is always a chance you may be unemployed in a matter of weeks. The cast needs to engage their audience show in, show out, as lackluster performances may lead to reduced ticket sales and, rather quickly, the show closing.” – Dance Magazine

“The debate about the future of moviegoing shouldn’t be a binary one between a studio system increasingly beholden to franchises and intellectual property, and a nihilistic streaming service set on eliminating all competitors and monopolizing its users’ attention. The real problem with film right now is a lack of diversity caused by a lack of competition — both in Hollywood and online.” – The New Republic

The next-to-last one, in suburban Perth, Australia, closes this month, leaving only the franchise in Bend, Oregon. “But this is no elegy for Blockbuster, no lament for how Netflix killed the video star. … This is about the ability of the Bend store, like sturdy links in other dying chains, to live on and avoid being turned into a pawnshop or a fast-food restaurant.” – The New York Times

The CSO music director said, in a letter to the board of directors, “I hope that the board will remember that theirs is not a job but a mission, and that tranquility and serenity will be given for the artists to do their work.” The musicians have voted to go on strike if agreement on a contract is not reached by March 10 (i.e., by the end of this Sunday’s matinee concert). – Chicago Sun-Times

“Over the course of Schneemann’s multifarious 60-year career, her art came to form the bedrock of radical traditions like performance art and body art, even while she insisted on identifying herself all the while with a traditional label. ‘I’m a painter,’ she said in 1993. ‘I’m still a painter and I will die a painter. Everything that I have developed has to do with extending visual principles off the canvas.'” – ARTnews

“According to research commissioned by the Man Booker International (MBI) prize from Nielsen Book, overall sales of translated fiction in the UK were up last year by 5.5%, with more than 2.6m books sold, worth £20.7m – the highest level since Nielsen began to track sales in 2001.” – The Guardian

While we tend to condemn clichés harshly, the scholar of rhetoric Ruth Amossy at Tel Aviv University has shown that they’re in fact crucial to the way we bond with and read other human beings. ‘How have you been?’ – ‘Not bad at all!’: in our daily interactions, clichés represent a communicative common ground, by avoiding the need to question or establish the premises of speech. They are a kind of a shared mental algorithm that facilitates efficient interaction and reaffirms social relationships. – Aeon

Dear SFMOMA and Sotheby’s: Have you no shame?
It’s bad enough for a museum to decide it no longer wants a work that it had specifically requested from its owner. It’s much worse when that owner is the artist himself. How will future potential donors regard such caprices? – Lee Rosenbaum

“Edinburgh Fringe theatremakers earned an average of just £392.15 for their work at the 2018 festival, covering a period of as much as 40 days, with fair-pay campaigners branding the figures ‘shocking’. New research reveals that 38% of those surveyed were completely unpaid, with the average payment for those who did receive money standing at £637.25.” (That’s $835.99, or just under $21 a day for 40 days.) – The Stage 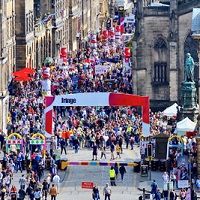