“[He] overcame the limited use of his right hand to develop a distinctive punchy style that made him a stalwart of the hard-bop movement of the 1950s and 1960s and a notable collaborator with such stars as Charles Mingus and Dexter Gordon.”

It would be enough that he steered two of the country’s key public stations away from looming financial ruin, or that he’s the executive who made the young Ken Burns’s career possible. But Chamberlin, as founding chief operating officer of the Corporation for Public Broadcasting, actually ceded a huge piece of his own power by insisting that each individual public television station operate autonomously, independent of the PBS network.

And now she has a new poetry record album. Yes, record album: “Happily at Naropa University there’s something called the Harry Smith house — it’s a little house on the Naropa campus — which Ambrose Bye uses to record everyone all summer. I had gone into that little house the summer before and recorded a shitload of poems, new and old, and did it in a really messy fashion. I was reading and throwing the pages down, and Ambrose was doing the sound stuff, and Anne Waldman, who I’ve known forever, was there.”

Maybe. Of course, “many rival camps on the identity of Beethoven’s ‘immortal beloved’ have developed over the years,” but it could be a married, religious aristocrat who held the key to Beethoven’s heart – and his later, more intense work.

Joe Weisberg, writer and showrunner of “The Americans,” now in its fifth season: “How is this all happening again? When we started this show, the Soviet Union was gone. We were not in any kind of serious conflict with Russia. And it seemed like a good time to tell a story about those old bygone days. And how in a few short years Russia has turned into an enemy again makes very little sense.”

The woman who took over the schools when the founders passed away says that dance isn’t just dance, but a metaphor for life. “I like to instill in the children to work with a certain kind of integrity even if you are uncomfortable.”

No, Manchester by the Sea didn’t even come close: “Moonlight won every single award it was nominated for, including Best Cinematography, Best Editing, Best Screenplay, Best Director, Best Picture, and the coveted Robert Altman Award, recognizing greatness by an ensemble in independent film. It might have won even more – Mahershala Ali and Naomie Harris are both carrying a lot of buzz in the Oscars‘ supporting performer races – but the Altman Award disqualifies wins for individual performances.”

Not to mention ISIS. But humans – especially writers – have a chance to do something about it: “By imagining, we create the potential for what might be. Religions are composed of stories precisely because of this potency. Stories have the power to liberate us from the tyranny of what was and is. We are all creators of fictions, and we all have a role to play in imagining our way out of the nostalgic traps strewn around us.”

He’s supposed to be in it for a week, with just enough room to sit up. “People seem to be very touched. They come and talk into the crack, read poetry to me, or tell me about their nightmares or their dreams,” he said.

As Little Golden Books like The Poky Little Puppy turn 75, it’s clear that they did exactly what their creators intended: “The printers, publishers, writers and artists who brought Golden Books to the market had a lofty goal — they wanted to ‘democratize children’s books,’ making them both affordable and accessible. To that end, they were sold in department stores, train stations, drugstores and supermarkets.” 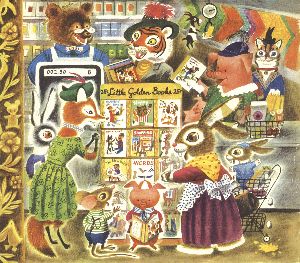