“Despite his ebullience, an aura of sorrow hovers over Eustis these days. The last eighteen months have been the most artistically and commercially successful of his ten years at the helm of the Public; but personally, it has been a time of terrible loss, including the deaths of his mother and stepfather.”

“The Museum of Digital Reading (in French, Le Petit Musée de la lecture numérique) will be the first permanent exhibition space in Europe dedicated to the history of reading devices.”

“The encroachment of liberal guilt into curatorial decisions is undermining the traditional purpose of the museum; a secular institution in the service of historical inquiry. It risks transforming our great institutions into places where understanding the past is conditioned by present-day political and therapeutic criteria. And yet it should be the role of a museum to open up the past to everyone.”

“In the hands of … Bjarke Ingels and his firm BIG, it won’t be any old brick wall. It’s a wall that will be stretched open and hollowed out, its oversized fibreglass bricks stacked up to form a paraboloid enclosure that will taper high above the park, transforming from a bulging cave to a slender screen as it undulates across the lawn.”

“What if artificial intelligence is so unfamiliar that we have a hard time recognising it? Could our machines have become self-aware without our even knowing it? The huge obstacle to addressing such questions is that no one is really sure what consciousness is, let alone whether we’d know it if we saw it.”

“When they become twelve or thirteen, kids often stop reading seriously. The boys veer off into sports or computer games, the girls into friendship in all its wrenching mysteries and satisfactions of favor and exclusion. Much of their social life, for boys as well as girls, is now conducted on smartphones, where teen-agers don’t have to confront one another.”

Of course not everyone is writing “in the style of” or explicitly quoting other pieces, but the desire to build perceptible bridges between musical traditions is nearly universal.

“HBO is in a period of challenge. It hasn’t had a breakout drama hit since Game of Thrones launched in 2011, and in recent months, it has seen several troubled shows go expensively into and then out of production.”

Even now, “the city has not fully recovered. … Some Cincinnatians see Mapplethorpe as a ‘liberating force’ that advanced the arts and tolerance in the city, while others view him as a kind of ‘blight’ that tainted Cincinnati’s reputation.”

“Five people have fainted watching the graphic scenes of torture, rape and violence in the National Theatre’s latest production while 40 walked out in the show’s first week.”

Adam Gopnik considers the British supermarket chain Tesco’s decision to stop making its croissants curved. “Adding an arbitrary national shape to an established one to attempt an entirely English croissant, [some] future scholar will argue, is an affirmation of refusing to be one with Europe. (The crescent, moreover, is the sign of the Islamic empire, and some damp, suspicious kinds will see meaning in that, too.)”

If confirmed by the Senate, she’ll also be only the second person in the position to have made a career as a librarian.

Stop me if you’ve heard this before. Someone says, “[X historically disenfranchised group] should stop complaining. They have way more privileges than I do.” When thus confronted, I have had to resist the visceral impulse … read more

It took more than six years, but President Obama got his way today, appointing the first African-American as Librarian of Congress: Carla D. Hayden, head of the Enoch Pratt Free Library, Baltimore’s public library. I should say “nominating,” because … read more

Interactive Hijinks: Putting the Viewer in the Picture

For some, it seems, it’s not enough to inhabit an artwork in their imaginations. They want to enter it physically. I’m embarrassed to own up to my own “living in a painting” experience: It occurred … read more

Gary Bartz At The PDX Festival

Alto saxophonist Gary Bartz opened his Portland Jazz Festival concert singing a slow blues. He wasn’t lamenting his or anyone else’s troubles. The main message of his lyric was, “Sadness gotta leave this room.” … read more

It’s remotely conceivable that you’re sitting around with nothing to do, and in case you’re in that enviable position, I have two hours’ worth of new recordings of my music up to entertain you. … read more

“As the festivals have blossomed, they have also turned into something more than strictly literary: a mixture of the public square and the television studio, or forums where India talks to itself.”

“My tweets got 102,700 impressions over the week, averaging 14,700 per day. However, the engagement rate was only 1.6%, which is pretty typical for the site. On Twitter, everyone has a megaphone, but few take incoming calls.”

“Here, 27 industry players reveal the stories behind the numbers – their personal experiences of not feeling seen, heard or accepted, and how they pushed forward. In Hollywood, exclusion goes far beyond #OscarsSoWhite.”

“TodayTix, which 26 months ago introduced a mobile app for selling discounted and full-price last-minute tickets, has already become a visible presence on Broadway … [But] the tight-knit world of Broadway theater owners has not welcomed TodayTix.”

“[He] said that he felt liberated after what he described as a lifetime’s and three divorces’ worth of suppressing what he once considered ‘devilish’ desires. The change has altered his music in ways both quantifiable and more ineffable.”

“Close to 100 populate the land; not long ago, the concept was virtually unknown here. … As the festivals have blossomed, they have also turned into something more than strictly literary: a mixture of the public square and the television studio, or forums where India talks to itself. … [And] increasingly, [these events] are being thrust into wider culture wars.” 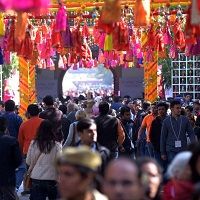