“I’m not suggesting for a moment that corporate virtue-signaling is driven by anything more than pure, uncut capitalism, or that a chasm doesn’t separate legitimate IRL activism from retail “activism.” But the point is that sincerity isn’t required for money to change hands. On average, people with the most surplus cash increasingly want to support a progressive agenda—or at least pay for a tenuous claim to it—and the for-profit world is adjusting itself accordingly. So why wouldn’t the nonprofit world benefit by doing the same?” – Artnet

“With IN UNISON Chorus, orchestra leaders made an effort [beginning] in 1994 to … welcome more African-Americans into the predominantly white world of European classical music. … Its members largely come from about three dozen black churches in and around St. Louis, where SLSO orchestra members also perform recitals throughout the year.” (text and audio) – St. Louis Public Radio

The Atelier des Lumières, a 2,000 sq. m former foundry in the 11th arrondissement, was launched last spring with a 30-minute immersive audiovisual experience of Gustav Klimt’s paintings, featuring mural projections of the images set to music by Wagner, Strauss and Beethoven. With full-price tickets at €14.50, it attracted more than 1.2 million visitors from 13 April 2018 to 6 January 2019. – The Art Newspaper

“Both the play Minefield and the documentary Theater of War are part of the same project in which [director Lola] Arias, together with veterans of the Malvinas/Falklands War of 1982, reconstruct memories in a tense and emotional production, in which the former British and Argentine soldiers are themselves the stars — former enemies, side by side.” – Hyperallergic

“She recorded for major labels in the late 1950s and the ’60s; toured Europe with Benny Goodman; performed onstage alongside Miles Davis, John Coltrane and Louis Armstrong; and appeared on television with Duke Ellington [and] Arthur Godfrey. … But she soon grew disillusioned with the demands placed on young divas, and she eschewed national celebrity for a quieter life in her hometown.” – The New York Times

Daniel Felsenthal: “I spent high school writing papers I never risked neglecting in order to play the drums, reading books I never lied about reading so I could go to a concert instead. I could dream of being a musician all I wanted. Through no conscious intention of my own, I was always training to be a writer.” – The Point

“‘Finlay’s sexual relations with (Waterbury) were not even remotely connected to his employment as a dancer for the Ballet,’ declared the court documents filed Wednesday. ‘Indeed, Plaintiff does not and could not allege that anything about Finlay’s job as a dancer required him to engage in a sexual relationship with her. … Even if the Ballet knew that Finlay had engaged in [‘partying and alcohol use’], they hardly suggest knowledge of a propensity for the distribution of intimate photographs alleged in the Complaint.'” – New York Daily News

Elspeth Franks is just one of an increasingly visible number of trans singers in the classical world who are challenging long-accepted notions about the intersection of gender and music. Operatic and choral singers, long segregated into rigid categories by vocal range, tonal qualities, body type and even simply gender, have begun to push back. – San Francisco Chronicle

“These are happening on works of art throughout the generations — since oil paint was created,” says a Smithsonian conservator. They’ve appeared on paintings ranging from Rembrandt to van Gogh to Chagall to O’Keeffe. Turns out they’re made of soap — and no, that’s not because anyone has tried to wash the canvases. – Smithsonian Magazine

“The head of the planning committee for the Paris 2024 games, Tony Estanguet, announced today that break dancing was one of the four new proposed events. Its inclusion is contingent upon approval from the International Olympic Committee, which is expected to make a decision after the conclusion of the Tokyo 2020 games.” – Dance Magazine

Scott Rudin, lead producer of the Aaron Sorkin adaptation now on Broadway and likely to tour eventually, has been trying to block stagings of the older version, written half a century ago by Christopher Sergel Sr. and still published by his family firm. (One tour of regional Britain was recently cancelled after Rudin threatened to sue.) Christopher Sergel III says this is doing real damage to his business. – Crain’s Chicago Business

“In China and Korea, millions of fans make micropayments to writers for incremental updates in their serialized stories.” Now a Korean entrepreneur has launched Radish, which offers a similar service to the American market: writers for TV soap operas develop serialized stories, mostly romance and horror, that get regularly updated in installments that take ten minutes to read on a smartphone. – Publishing Perspectives

Oh: “The announcement comes just days after the studio voiced its unflinching support for the actor, but that support flagged Thursday after Chicago police held a news conference delineating how the department believed Smollett staged the attack because he was ‘dissatisfied with his salary.'” – Los Angeles Times

Yes, one woman can hula with up to 200 (200?!) different hoops. And that’s not easy: “A quick primer on the physics of this stuff: For a Hula-Hoop to continue spinning, one must apply force to the hoop in both the fore-aft and up-down directions. ‘The Hula-Hoop stays aloft thanks to conservation of angular momentum, but the system is extremely unstable—one little hiccup, and the hoop comes tumbling down.'” – Wired

The co-artistic director says that “the cast members’ travel documents were scrutinised for three hours, with the group returning the next day to be told that one of the actors, Syed Haleem Najibi, would be unable to travel as the officials claimed they had never heard of the Home Office Certificate of Travel that he was carrying.” – The Stage (UK)

Well, yes, it can be. If you want to see a Western that focuses on women without being cutesy or trite about it, look abroad. The form is still legendary; now it lives better in places where “it’s no longer a throwback.” – Los Angeles Review of Books

Hannah Beachler, the production designer for Black Panther, was the first Black person nominated for the award. She and director Ryan Coogler took their time creating the sets for the visually magnificent movie. “‘The rocks, the moss on the rocks, how the rocks were formed, how they were layered, the color of them — everything around me that was nature I took pictures of,’ Beachler says. Beachler also took note of the architecture, clothing, food, transportation and ways of life.” (Alert: This all paid off, and she won at the Academy Awards on Sunday night.). – NPR

Sure, the man had millions of novels of his own in print – but millions more under other pseudonyms (Griffin is also a pseudonym for William E. Butterworth III), not to mention the numbers of books he ghostwrote. “His fast-paced novels, rooted in history and chockablock with technical details, combined action, sex and patriotism and had a devoted readership.” – The New York Times

If you thought middle school girls were “innocent” while middle school boys awoke to their own sexuality, well, think again. In new movies and TV shows, “our girls are awkward and weird. They are undergoing orthodontic treatments. They have made out with every bedpost and doorframe in their bedrooms. Through their eyes, it is the boys who become smooth, uncomplicated objects.” – The New York Times

Meg Wolitzer, author of The Wife (among many other novels): “All of this is heady, effervescent stuff for a novelist. … I felt a particular kind of excitement. It wasn’t just the generic Hollywood feeling to which many of us are susceptible. The face for which I had created the outline had been filled in, saturated with new meaning.” – The New York Times

Two actors who played opposite each other in two different plays end up on Broadway at the same time – each in one of those plays. How did they not end up together in at least one of them? Whew: “It’s a bit sensitive, because my agent who was the point person died, and there was a miscommunication,” says one. – The New York Times

Nina Katchadourian and her husband fly a lot, hence the airplane bathroom selfies – but the Flemish recreations are a small part of her work. She says her work is funny partly because “it’s seriously difficult for people to reconcile humor and art co-existing, which points to an old-fashioned or romantic expectation about art that is selling humor short. Humor is sometimes the only way to speak intensely serious things.” – The Cut

That is to say, when the current U.S. president, and his family, are satirized or otherwise memorialized in art, it’s often not very good art. “A lot has appeared over the past few years — Mr. Trump as an animatronic fortuneteller, a portrait of Mr. Trump made from pornographic images, a presidential double locked in a jail cell (in a Trump hotel) — but little of it has been memorable. I’m grateful that artists are responding creatively to the current moment, but why do so many of their efforts miss the mark?” – The New York Times

The town used to be known for casinos, and then for being “a musical retirement village,” but now it’s getting “residencies” from stars like Britney Spears and, suddenly, both Drake and Cardi B. That says something about Las Vegas, but “it also says they are at the forefront of the next stage of hip-hop’s total cultural dominance, with a Vegas residency the ultimate in infiltrating middle America.” – The Guardian (UK)

Guillaume Verda, a French artist, has scrubbed his website, set his Instagram to private … and lost a prestigious gallery solo show after being accused of plagiarizing Jean-Michel Basquiat. “One thing is certain: the artist’s style bears a striking resemblance to Basquiat’s. But does that make it a tribute or a cheap knock-off?” – France24

Here you go – because although “these days the awards are a more subdued hooray for Hollywood, some of the best books on the industry have always warned of the dream factory’s problematic side.” – The Guardian (UK)

Obviously, take the lead, realize there’s a problem as standards change. Instead, protests driven by social media are shaming some of the world’s most venerable cultural institutions, and they’re looking pretty bad. But there’s a balancing act to consider, writes Adrian Ellis… – The Art Newspaper

Argento was always a force apart. He belonged to no compositional school, preferring a distinctly eclectic language that appealed both intellectually and emotionally to his audiences. At a time when most of the celebrated American composers were based on either the East or West coasts, where they could work together and help promote one another’s music, Mr. Argento lived and worked in Minneapolis throughout his career, teaching composition at the University of Minnesota and working closely for many years with the director Sir Tyrone Guthrie at what became the Guthrie Theater. – Washington Post

Netflix’s strategy is fundamentally different. Instead of trying to sell American ideas to a foreign audience, it’s aiming to sell international ideas to a global audience. A list of Netflix’s most watched and most culturally significant recent productions looks like a Model United Nations. – The New York Times

“While these allegations are very disturbing, we are placing our trust in the legal system as the process plays out,” said a statement from the series’s producers at 20th Century Fox. “We are also aware of the effects of this process on the cast and crew members who work on our show and to avoid further disruption on set, we have decided to remove the role of ‘Jamal’ from the final two episodes of the season.” – The Washington Post 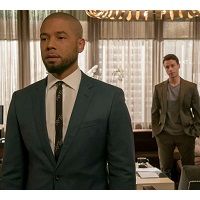