The playwright has four Tony nominations, including one win, as well as Drama Desk and Obie Awards. What led him to become a member of the tiny Gift Theater? Anne Spiselman called him and asked.

Rivka Galchen writes about how she, like many, misunderstood Don Quixote when she first read it. Benjamin Moser argues that the answer to the question has to be the Bible. (Too easy?)

“In a series of public talks entitled ‘The Cassandra Phenomenon,’ world class writers Herta Müller, David Grossman, and Wole Soyinka [added] their voices to the debate about international security challenges.”

“The Whitney may have been the first New York museum to signal its resistance to the new Administration, but waves of actions have followed. No major institution closed in response to the #J20 movement’s call for an art strike during the Inauguration, but the Whitney invited Occupy Museums to program a series of talks in its theatre, and the Brooklyn Museum hosted a seven-hour reading of Langston Hughes’s poem “Let America Be America Again.” Most significant, the week after Trump signed his now unravelling travel ban, the Museum of Modern Art replaced seven works in its sacrosanct fifth-floor galleries—the domain of van Gogh, Picasso, and Pollock—with pieces by artists from three of the seven targeted Muslim-majority nations.”

“Filmed entirely in China, the film is a $150-million (U.S.) attempt to prove that with enough money and talent, some of the brightest entertainment minds on both sides of the Pacific can assemble a film that audiences in both China and the West want to watch. It is also perhaps the most visible flagpost in a sweeping attempt to build China into an even greater entertainment power, one with the technical capacity and storytelling savvy to win over audiences far and wide.”

Equity says, “The council has committed an act of cultural vandalism in Bath that will result in a new dark age for arts and culture in the region.”

Take learning by ear, combine it with some out-of-control pop psychology, and mix in experimentation and perhaps some flat-out lies of biography, and you’ll get this pedagogy that powers much of North American violin teaching.

“‘Concrete is dumb,’ Mr. Tor said. … ‘It doesn’t know for whom it is being poured.’ Engineering necessity gave birth to one of the most inviting facets of the terminal’s undulating interior: ribbons of skylights along the joints that were opened among the four vaults. The skylights turn what might have been a heavy blanket into something luminous and billowy.”

Basically, “signed pointe shoes often become gift-shop items or special giveaways for ballet fans. But Copeland’s worn-out shoes are different. The principal dancer with American Ballet Theatre has achieved rare celebrity status.” In an auction that closes today at 7 pm Eastern, they – and some other memorabilia – are being sold as a Washington Ballet fundraiser.

No, IMDb, the conversation has not all moved to social media – even a social media administrator could tell you that: “There is a definite sense of community on the boards. You won’t be able to use the site in the same way.” But the site’s admins might (with reason) think that racist trolling has gone way too far. So as of today, Feb. 20, all of the content will disappear.

Kounellis, who left Greece for Rome when he was 20, “made a highly distinctive contribution to one of the most provocative artistic movements in postwar Europe.”

It’s possible that the “Trump Bump” that’s been helping the New York Times, Teen Vogue, ProPublica and other print/online publications is also driving more money toward the producers of the Oscars. The current president “‘has been very good for television,’ said Ashwin Navin, chief executive of Samba TV, a data and analytics firm. ‘The politically charged environment has been good for television, including these award shows.'”

Or really, more than one revolution – and constant revolutions: “Art isn’t easy. It’s not just that we need a revolution in style but also a revolution in audience, distribution, circulation, performance, perception and, indeed, motivation. These revolutions are never a question of being marked as ahead of the times. … Rather, the issue is staying in and with the times and not letting the times drown you.”

The 19th-century painting has been feted by both North and South over the decades since it was painted. “”It’s one of our greatest Civil War artifacts in what it can teach us about what Americans have remembered and disremembered about the Civil War,’ Gordon Jones, senior military historian at the Atlanta History Center and co-leader of the cyclorama move and restoration team, told Hyperallergic.”

Her story is compelling, and her art came to London and New York with the power to change the accepted story of art history. “It was not until she was in her 90s that Ms. Choucair, who lived and worked nearly all her life in Beirut, gained recognition outside Lebanon as an unsung hero of the modernist story, a distinctive, eloquent artist relegated to the margins of a traditionally Western narrative.”

One current show has an intentionally provocative name because “‘It’s really a colonial idea that our women didn’t carve. Our women have always carved,’ said Lou-ann Neel, the carver’s granddaughter and an advising curator for the exhibition. ‘I’ve already heard a few people say, ‘Well, you know, our grandmother was also a carver.’ Good, I want to hear about her. Let’s talk about her, too. Because all of our communities need these role models to come from the last couple of generations and encourage our young girls and women to pursue the arts, too.'”

Canadian filmmaker Amber Fares: “There are so many films that deal with the politics of Palestine/Israel, but we didn’t want to get into the details of that; it just plays out naturally through their lives. It’s politically important that we see more diversity in our media, full stop.”

Can “Amélie” and “Come From Away” make it where West Coast transplants have failed before? The L.A. Times’ Charles McNulty says, “Musicals en route to New York receive an enormous amount of tinkering, polishing and sharpening. Rarely, however, does all this primping smooth over structural cracks in the book or holes in the score.”

While the population of the U.S. is 38 percent people who identify as African American, Latino, Native American, Asian American, or Pacific Islander, books written or illustrated by people from those categories clocked in at just 427 out of 3,400 children’s books published in 2016.

Of course, it came into being because of war – WWI, to be precise, and because “Britain was at the time trying to bring China into the war on the Allied side.”

Miffy, or Nijntje in the original Dutch, was a rabbit that first appeared in 1955 after the creator told his son a story about rabbits. “Miffy remained unchanged in the many subsequent titles, although there is sometimes a scarf or hat, or outlines filled with a solid primary colour to show a change of outfit. Initially, and until the books were translated into English, the character was just a small rabbit; the gender was not defined. The most important feature of the books, Bruna said, was that ‘Miffy is always Miffy and a house is always a house.'”

The convenience store exhibit, which is also, sort of, a functional convenience store, is supposed to be a critique of art-world prices. But one anonymous artist says they stole an art – or convenience store? – bag of cat food. “‘Do not be confused,’ wrote the artist in Spanish, under the nickname ‘Peligro’ (Danger). ‘Oroxxo isn’t a criticism of capitalism, it is an act of capitalism.'”

“A new study says that the economic impact of college — in postgraduation wages — is very much tied to the income of students’ families growing up, with students from wealthier families earning more than others. Some might assume that this difference is due to enrollment patterns, in that wealthier high school students are more likely than their less well-off counterparts to enroll at highly competitive colleges whose graduates are more likely to earn more in their careers. But the study found this impact even after controlling for a number of factors, such as competitiveness of college attended.”

The news was announced yesterday, with the publishing and theatre licensing company blaming an “unsustainable rental increase” of up to 300% at the Fitzroy Street premises over the past five years.

“A large Guercino painting that was stolen from a church in Modena in August 2014 has been traced by Italy’s Carabinieri art crime squad to Casablanca, Morocco. The Italian government is negotiating to return Madonna with the Saints John the Evangelist and Gregory the Wonderworker (1639) to the Church of San Vincenzo ‘as soon as possible’.”

He was known for using as materials everything from old furniture to coal to jute sacks to live birds; the 1960 show that made him famous involved 12 live horses. 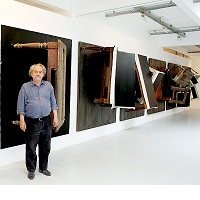