A groundbreaking musician who had been one of only four women in the BSO in the mid-1960s, Ms. Schaefer was 95 when she died of chronic obstructive pulmonary disease on Jan. 31 in Sequim, Wash., where she lived in retirement with her older sister, a former cellist with the orchestra. – Boston Globe

More than 70 staff have left the GSA since a second fire devastated the Mackintosh building in June 2018. Last month Gordon Gibb was sacked for breach of contract for giving his views on failings at the GSA. When he gave evidence at the Scottish Parliament’s culture committee, he called for the iconic building to be taken out of the hands of its board following the two fires. – Sunday Post (Glasgow)

Over the past decade, both William Grant Still and Florence Price have acquired new prominence. But the buried treasure is William Levi Dawson’s Negro Folk Symphony of 1934. – Joseph Horowitz

Michael Kimmelman: “It almost seems conceived to provoke supporters of both modern architecture and architectural diversity. It’s a shiny object, Twitter bait. The populists versus the elites. Outrage enraptures President Trump’s base. It’s a win-win for him.” – The New York Times

He founded the LA Review of Books. He argues for LA as the center of the book publishing industry. Now he’s written a novel as he follows the Kerouac school of writing. – Los Angeles Times

While few may lament the disappearance of these hate-filled books, the increasing number of banished titles has set off concern among some of the third-party booksellers who stock Amazon’s vast virtual shelves. Amazon, they said, seems to operate under vague or nonexistent rules. – The New York Times

The thing about Parasite is that even before it became the first non-English language film to win a Best Picture statue, it “had already earned all the accomplishments that really matter; it didn’t need an Oscar.” Or maybe it did, or the Oscars needed Parasite. “In taking home the Best International Film trophy and also claiming the biggest honor of the night, Bong’s movie made the Oscars slightly less local.” – The Atlantic

Gudnadóttir won for Joker. She said, “To the girls, to the women, to the mothers, to the daughters who hear the music bubbling within, please speak up — we need to hear your voices.” – The Hollywood Reporter

The Belgian artist Léon Spilliaert “is the great night bird of modern art. Restless, insomniac, and suffering from stomach ulcers from a very young age, he would rise in the small hours and walk the dead streets to the long promenade where Ostend meets the shore. His art is captivated by the unnerving solitude and silence. Image after image shows the empty seafront, the lone gaslights along the pier, the vertiginous steps dropping down to the wide blank sands, the black sea turning over and over.” Perfect for February, really. – The Observer (UK)

Banderas may be a Spanish speaker first, but the actor “is from Málaga, Spain, and does not identify as a person of color. There are nonwhite Spanish people, but this isn’t the case for him.” And whew. Media outlets lumping him in with Cynthia Erivo to give the Oscar acting nominees some diversity are not being accurate. (But many white Spaniards’ responses aren’t great either.) – NPR

Laura Dern won best supporting actress for her role in the Noah Baumbach Marriage Story, and Netflix also got an award for the Obamas-supported documentary American Family. “This is disappointing for Netflix, if the reportedly prodigious budget the company dedicated to its Oscars campaign—estimated to be at least $70 million—is anywhere close to what was actually spent.” Streaming does not win the day, again. – Slate

Freni had a “special claim on [the Italian] tradition, which valued bel canto principles of producing rich, unforced sound; of shaping even, lyrical lines across the range of a voice; and of sensitively matching sound to words.” – The New York Times

The Korean writer and director of the dark comedy and class parable Parasite wasn’t prepared to win best director, which he did, or for his film to win best picture, which it most certainly did. When he won best director, he said, “After winning best international feature, I thought I was done for the day and was ready to relax. … When I was young and studying cinema, there was a saying that I carved deep in my heart, which is that the most personal is the most creative. That quote is from our great Martin Scorsese.” (The other winners are also available at this link.) – Los Angeles Times

With films like Birdman and last year’s The Body Remembers When The World Broke Open and Oscar fave 1917 edited to appear as if they’re single shots, what’s the deal? The “single-shot” movie has become much more popular in the past few years, perhaps “the technical virtuosity required of a one-shot film marks its director as an auteur. And these films feel somehow pure — compared, at least to the CGI trickery and hyperactive editing of blockbuster superhero movies.” – NPR

Cool use of big data, no? Real shocker though: “When you look at the birthplaces of all the winners together, you can see the Academy tends to favor American-born talent, with Europe as a close second.” – Fast Company 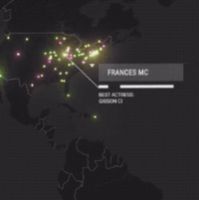