Back in 2005, as they were nearing retirement from Pennsylvania Ballet, Christine Cox and Matthew Neenan decided to put together a little group to dance at the Philly Fringe. They hoped that maybe, one day, they’d perform at Jacob’s Pillow and Vail. Now BalletX has ten dancers on 40-week contracts, commissions major choreographers, does up to eight world premieres a season, and tours around the U.S. (yes, including Vail and the Pillow) and to Europe. – Pointe Magazine

Starting this month, London’s Battersea Arts Centre is making all its events “relaxed performances” — at which audience members may enter, leave, move around, and sometimes make noise, and first developed for neurodivergent patrons. – The Times (UK)

In settling out of court, apparently,  “Audible has agreed not to include the copyrighted works of seven plaintiff publishers in its ‘Captions’ program without express permission.” This does not, of course, apply to works in the public domain, and indeed, “Audible sources confirmed to PW that the company currently has no plan to move forward with the Captions program beyond its limited pilot with public domain works for students.” – Publishers Weekly

Michael Rosen blames the Reformation – truly. That time period was “when they thought the only way you could be virtuous was to be modest and serious, so humour was pushed aside, seen as frivolous … even dangerous. And that seeps through into education today, so there’s a slight fear of subversiveness or laughter, as well as a dismissal of it. And for some of us, humour is a means of survival.” – The Guardian (UK)

Rees, whose Pariah hit the indie scene hard in 2011 and whose 2017 Mudbound earned four Oscar nominations, “is placing a thick spread of bets, in the hope that she will soon be able to play as boldly as she wants” in Hollywood. “Rees said her strategy is to work on ‘five things at once and see which one sticks.’ Each time we talked, she was working on a new project. Once it was a television show about a black police officer in the South, set in the 1970s. Another time it was a potential collaboration with a black playwright. This is both a survival tactic designed to navigate the ever-changing tides of a mercurial entertainment industry and perhaps also a defense mechanism.” – The New York Times

“How is their pelvis shifting? How is their back moving? Is their foot collapsing in as they’re plieing? Is their weight over as they jump onto one foot?” They’re finding points of weaknesses before they turn into problems. – News 5 Cleveland

New OSF director Nataki Garrett has big plans. In the next few years, she plans to push technology-driven initiatives, like the launch of a digital archive and an OSF app. She’s also developing a residency for artists across different mediums as well as forging an alliance of West Coast theatres. As she marches toward her one-year anniversary, Garrett continues to think about OSF’s expansion and catalyzing larger shifts in the American theatre. – Playbill

Musicologist Doug Shadle introduces his new blog/newsletter by suggesting that both the professional concert ecosystem and conservatory education can’t modernize, as everyone seems to think they should, because of “nineteenth-century elitism designed to exclude and punish rather than help students thrive. These values are so pervasive that we often can’t see them for what they are.” – The Classical Alternative

She had been the magazine’s theatre critic for less than two years, and in trouble with her editor for much of that time, when one column enraged both David Belasco and Florenz Ziegfeld so much that libel suits were threatened. Her dismissal became a minor cause célèbre in the press, made her famous enough to maintain a freelance career ever after, and launched the Algonquin Round Table on the road to renown. – The Public Domain Review

Some of them are sweet and sentimental, but they can be every bit as weird as those of actors and athletes. Sarah Kaufman talks to a dozen or so dancers from several companies about what they do and why. – The Washington Post

“The classical music station Radio 3 has recorded its joint highest audience share since records began, as listeners weary of politics take refuge in Brahms and Bach. The BBC station reached 2.13 million listeners a week in the last quarter, up 16 per cent on the same period for the previous year.” – The Times (UK)

“In edited excerpts below, filmmakers, awards-watchers and academy members” — among them Barry Jenkins, Ava DuVernay, Spike Lee, and former Academy president Cheryl Boone Isaacs — “tell the inside story of how what began as a three-word hashtag forced an insular, $42 billion industry to change course.” – The New York Times

“People were more likely to stream a movie when they knew it had been released in theaters, according to a new survey by Ernst & Young … Sixty two percent of the study’s respondents reported that if a movie had appeared in cinemas, they were more willing to check it on their streaming services.” – Variety

“After a tumultuous period in Hong Kong marked by continuing protests and fears of a coronavirus outbreak, Art Basel has called off its fair in the city. … MCH Group, the holding company that owns Art Basel, said that the coronavirus and ‘severe logistical challenges’ limiting travel were among the ‘numerous factors’ that had influenced the decision. The ongoing protests were not mentioned in the release.” – ARTnews

“Our sector relies on the gambling industry for over a third of its public investment in a country where an estimated 430,000 people have a serious problem with gambling. And we seem to take active pleasure in that fact.” – ArtsProfessional

A traditionalist maestro who led more than 400 performances at the Met, he had to wait a while before critics gave full credit to his gifts, but singers and orchestral players adored him. – The New York Times

In a seven-page draft executive order obtained by the Chicago Sun-Times, Trump declares that the federal government since the 1950s has “largely stopped building beautiful buildings that the American people want to look at or work in.” Future federal government buildings, he decrees, should look like those of ancient Rome, Greece and Europe. “Classical architectural style shall be the preferred and default style,” he states. Trump’s draft order is titled — get ready for it — “Making Federal Buildings Beautiful Again.” – Chicago Sun-Times

A native of Syracuse, New York, and graduate of Marquette University, Kot worked for the Quad City Times in Davenport, Iowa, before joining the Tribune as a copy editor in 1980. Ten years later he was promoted to music critic and quickly established his reputation as a trusted and insightful writer on popular music across many genres. – Robert Feder

I never sit around pining for what might have been. What was and is, after all, have both proved to be wholly satisfying. But when you get to be my age — I turned sixty-four today — you can’t help but think about the roads you didn’t take, the unknown and unknowable possibilities. – Terry Teachout

Johnny Griffin and Eddie “Lockjaw” Davis were tenor saxophone masters whose collaborations made them among the instrument’s most celebrated players. Their “new” album is titled OW! after one of its tracks, a celebrated Dizzy Gillespie composition from the early years of bebop. – Doug Ramsey

“An initial batch of nearly three dozen pieces from the 2018-19 season are now available for listening on the orchestra’s website — a number that will grow over time. … The number of performances ultimately available through the new ‘Listen on Demand’ service is potentially hundreds culled from several decades.” – The Philadelphia Inquirer 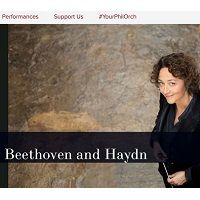