“His name was William Dorsey Swann, but to his friends he was known as ‘the Queen.’ … Beginning in the 1880s, he not only became the first American activist to lead a queer resistance group; he also became, in the same decade, the first known person to dub himself a ‘queen of drag’ — or, more familiarly, a drag queen.” – The Nation

“Years from now, when school groups visit the National Museum of American History, they might learn about the impeachment of a president through a fidget spinner. And they will have Jon Grinspan, the Smithsonian’s curator of political history, to thank.” – The Washington Post

“Both are 69 now. As the wife and husband who founded the Los Angeles dance company in 1980, the two continue to strike the delicate balance between artist and administrator” — a job Erwin gave up his own career in journalism to do — “between ambitiously creative and cautiously pragmatic.” – Los Angeles Times

“Missouri House Rep. Ben Baker introduced the bill, dubbed the ‘Parental Oversight of Public Libraries Act,’ in January that calls for the creation of a panel made up of non-library workers who will determine the removal of ‘age-inappropriate sexual material,’ from their local branch. Libraries that don’t comply will lose their funding. Library employees providing material deemed inappropriate would be hit with a misdemeanor charge and liable for a $500 fine or a maximum jail sentence of a year, according to the bill’s current language.” – ABC News

Kathleen Parker: “Once Cummins’s genetic shortcomings caught the attention of social media’s literati, it was off to the bonfires. Not only was she condemned, prompting her to cancel her book tour in fear for her safety, but a petition was circulated asking Oprah Winfrey to remove Cummins’s novel from her book-club list.” – Washington Post

“When I set out to write this novel, which takes place in Iowa and centers around 46-year-old Meradyth Spensir and her 8-year-old son Chab, my goal was to shed light on the struggles that white middle-aged women in America face — struggles that I, a 28-year-old Latino man, don’t know much about but I would imagine are pretty tough. And as far as I’m concerned, I freaking nailed it.” – McSweeney’s

Launching this month, 50+50: A Creative Century from Chouinard to CalArts is a program for which 50 artist-alums are creating new works, typically in editions of 10 to 20, and produced by Lisa Ivorian-Jones. The pieces will be sold to raise scholarship funds for the school, in order to support a new generation of would-be artists who might not be able to afford CalArts’ tuition, currently at $50,850.  – W Magazine

Easy: Require Canadian content from networks – including Netflix and other streamers. First Nations advocates say it’s also time for their equal inclusion in Canada’s Broadcasting Act. But can a minority government put the recommendations into place before it’s too late? – CBC

It’s the first classical troupe in the world to make that choice. “‘Why not? There’s been all-men years for the past 150 years where only men choreograph,’ says Patricia Barker, the company’s artistic director, who has scheduled works by the legendary American choreographer Twyla Tharp and established New Zealand names, along with shows by up-and-coming creators.” – The Guardian (UK)

Some professors and grad students are trying to change that, but right now, the situation is this: “The four films that the organizers are hoping to digitize (Fabrication Des Chapeaux De Manille, Industrie De L’abaca A L’ile De Cebu, Glimpses Of The Culion Leper Colony And Of Culion Life, and Manila Street Scene) are among the oldest examples of Philippine filmmaking but are currently only available on 35mm in London’s British Film Institute National Archive on a pay-per-minute basis. This makes viewing them somewhat difficult and expensive, particularly for those not based in the UK.” You don’t say. – Hyperallergic

Sounds like the Tanztheater Wuppertal might not be the easiest place to run: Adolphe Binder, who was dismissed in 2018 after only a year in the job, was the fourth person to run the troupe since Bausch died in 2009. “During her brief tenure, she commissioned works from the choreographers Dimitris Papaioannou and Alan Lucien Oyen — the first full-length pieces to be created for the company since Bausch’s death. They were well received and have toured widely. But in a statement issued at the time of her dismissal, the board suggested that Ms. Binder’s managerial and organizational abilities were harmful to the functioning of the troupe.” – The New York Times

Well, this is interesting. As the series gets closer and closer to the present, perhaps some members of the Royal Family have expressed strong displeasure. One wonders. In any case: The role played by Claire Foy and Olivia Colman next goes to Imelda Staunton. Writer and producer Peter Morgan: “At the outset I had imagined The Crown running for six seasons but now that we have begun work on the stories for season five it has become clear to me that this is the perfect time and place to stop.” – The New York Times

The answer, students say, is absolutely yes – and the #MeToo movement hasn’t yet begun to filter through many conservatory halls. “Over the past year, The Atlantic talked to more than four dozen young musicians about their experiences with classical-music education and sexual misconduct. Their accounts reveal a culture built on hierarchy, critique, and reputation, and show how such a culture can facilitate abuse.” – The Atlantic

While Disney wants to “integrate” Hulu into its own streaming services operations, Hulu isn’t going anywhere – yet. “Hulu, known for original series such as the Emmy-winning The Handmaid’s Tale, is also a key part of Disney’s streaming strategy. While Disney+ is the home to more family friendly-content, Hulu is expected to carry edgier programming from Disney-owned properties.” – Los Angeles Times

So this is how Great Britain’s time in the EU ends, not with a bang, but … “Edward Gregson, the British composer charged by Radio 4’s PM programme with the tricky task of composing a piece to mark the UK’s departure from the union, uses Beethoven’s theme as the basis for his ‘Notes Between Friends,’ a brief, melancholic duet for piano and cello (played by the composer and Peter Dixon, principal cello of the BBC Philharmonic). Gregson insists he has been even-handed in his treatment – the brief called on him to give ‘a middle-of-the-road view’ of Brexit, ‘not too joyful, not too sad’ – but in reality this is about as far from an ode to joy as it is possible to imagine.” – The Guardian (UK)

Alexa Maxwell is the girlfriend of Amar Ramasar, the dancer who was fired, and then rehired, by City Ballet for his role in sharing nude photos and videos of dancers – including Maxwell. “‘I am not a victim in this,’ the dancer, Alexa Maxwell, said in a news release. She explained that Mr. Ramasar had expressed his regret over the situation and that she had forgiven him.” (She was not, however, the only one whose images were shared without permission.) – The New York Times

Feldman took the classic doily craft and turned it into fashion and art. She sold her creations mostly “at Studio Del, a boutique she opened in 1965 on East Seventh Street in Manhattan’s East Village. The garments — including open-weave vests, string bikinis, minidresses and capes — seemed to capture the freewheeling spirit of the neighborhood and of the 1960s counterculture. Her clientele included Janis Joplin, Jimi Hendrix, Grace Slick and Andy Warhol.” – The New York Times

Though we’re not sure why they would, considering the book’s sales, Slate takes a gander at what publishers are saying about #ownvoices books. Or, well, they’re not; they mostly seem to think the book was simply positioned for the wrong market. “‘You can’t be Twitter woke and Walmart ambitious,’ the assistant editor quipped.” Wow, OK. That certainly says something about what publishers are thinking. – Slate

DirecTV must have seemed like a good deal in 2015. Now, it’s absolutely hemorhagging subscribers – nearly 3 million last year alone. It’s been a dizzying fall. “DirecTV was an invention of Hughes Aircraft Co., which was founded by eccentric aviator Howard Hughes in 1932. … The service launched in 1994, attracting customers in rural areas that lacked cable TV coverage. Within a decade, DirecTV had 13 million customers. Its groundbreaking NFL Sunday Ticket package proved a big hit with sports bars and die-hard football fans.”- Los Angeles Times

Liz Garbus and Todd Phillips both won Sundance awards for documentaries in 1998, and they’ve both been working filmmakers ever since. But Phillips is about to go to the Oscars with an obscene number of nominations for The Joker while Garbus opens her first feature at Sundance. “‘I don’t know Todd’s trajectory, and if he tried to make more docs’” said Garbus. ‘But I had a script I was carrying around in my pocket for a long time after The Farm that I couldn’t get made. So why are there more female documentary filmmakers? Because the pay is less. The threshold for entry is less. The budgets are less. I don’t think women are inherently better documentary filmmakers.'” – Los Angeles Times

All 56 of her books were bestsellers, according to her publisher. “In her memoir, Kitchen Privileges (2002), Ms. Higgins Clark described herself in her younger years as ‘aching, yearning, burning’ to write, certain that she would succeed but needing guidance. She eventually found it in a writing class at New York University. The professor suggested that his students seize upon a situation that they had experienced or read about and begin by asking the questions ‘Suppose …?’ and ‘What if …?'” – The New York Times

The authors welcomed a drop in the proportion of white executives from 86% in 2015 to 78%, “since true change in company culture almost always requires buy-in from the very top”. But the numbers of white people in editorial roles increased from 82% to 85%, “so, even though more diverse books are being published now, it’s fair to assume that the majority of them are still being acquired and edited by white people”. – The Guardian

He was the only executive to creatively run CBS, ABC and NBC. Silverman’s knack for identifying hit shows in the making and programming them into memorable primetime nights led Time magazine to crown him “The Man with the Golden Gut” in 1977. – Deadline

The review comes at a perilous time for the BBC, with insiders and industry observers worried that the broadcaster is facing an existential crisis. As well as a hostile government, which is skeptical about the BBC’s funding model and unhappy with its coverage on Brexit, the broadcaster is dealing with a tsunami of disruption from U.S. streaming services and having to make savings £800M. Head of news and current affairs Fran Unsworth told staff this week that she can’t remember another time in her 40-year BBC career when the broadcaster has been so under threat from external forces. – Deadline

The museum is highly dependent on the tourist market. A huge 85% of its visitors are from abroad, many of whom come during the summer season. In the Netherlands, Van Gogh is widely regarded as a “tourist artist”. The challenge for Gordenker will be to woo more Dutch visitors, particularly during the winter. She also feels it is important to make the museum more inclusive, attracting young and old and those from the substantial immigrant community in the Netherlands. – The Art Newspaper 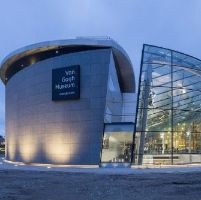