“There isn’t even a word for us, really. Quiz players? Trivia fanatics? I prefer quizzers. But when I use that to describe myself to a civilian – to a non-quizzer – the inevitable inquiry follows: ‘What does that mean?’ For that question, ironically, there is no easy answer.” – The Guardian

“I am discovering the possibility of the choreography coexisting with sound, maybe not being as dependent as I usually am. That opens a field I haven’t really explored. But I don’t have the courage to fully go there; it’s just testing how it feels. In some places the choreography is parallel, not connected, to the music.” – The New York Times

The handover of the building from a contractor to the constructor has been delayed due to incomplete delivery of fire and security doors as well insufficient performance and unsatisfactory operation of the building’s climate systems, the newspaper Dagbladet writes. The new Munch museum has already been the subject of criticism over its design. Architecture editor Gaute Brochmann, in comments to Dagbladet, has likened it to a “threatening black shadow, a coal-grey block looming over the Opera”. – The Local No

In the wake of a coronavirus outbreak that has infected thousands and claimed more than 100 lives in China, the movie industry is grappling with the unthinkable: Nearly every cinema in the country, totaling about 70,000 screens, has shut down. – The Hollywood Reporter

The emphasis on participation – on culture as something that more people should actually do – is newer. This is the difference between being in a play or a band and buying tickets to watch them, and for ACE to play a more active role in promoting the former would be beneficial. This begins in childhood, and ACE clearly hopes that the government will think again about policies that have seen music, drama and other arts subjects systematically downgraded in favour of science, technology and maths. – The Guardian

There is a direct correlation between museum shows and spikes in interest at auction. “It confirmed in a reasonably analysed way that there is a relationship and, therefore, to support museums is not completely philanthropic—there is a commercial spin off.” – The Art Newspaper

The plaintive question came from Sara Mearns as she and her colleagues listened to the decidedly avant-garde music choreographer Alexei Ratmansky had selected for his new work, Voices. Ratmansky’s response: “There is no musicality, just your own.” – The New York Times

The warning against treating characters as if they were real stands as a gatekeeper to the academic discipline of literary criticism. Students who can’t abide by the rule will get bad grades. The professor will sigh and conclude that they just don’t have what it takes to become decent literary critics. Yet the same students may love reading, really get into the novels we assign, and be both confused and depressed to learn that to discuss the problems of Elizabeth Bennet as if she were their friend is to fail in some fundamental way. – The Point

“If you’re one of the millions of people to re-embrace vinyl records, it’s worth knowing where they come from and how they’re made.” (It ain’t pretty.) – The Guardian

“Outrage is the perfect negative emotion to attract attention and engagement – and algorithms are primed to pounce.” Worse, “misleading content on social media tends to lead to even more engagement than verified information.” On the other hand, once you’ve been cancelled, algorithms can help you (to overextend the metaphor) get revived on another network, as in the case of Kevin Hart. – The Conversation

“For two decades, CollegeHumor rode a number of online trends and movements. The company started as the brainchild of literal teenagers, and it outlived many competitors because of this precocity about the social web. Until, all of a sudden, the social web helped render its business model obsolete.” – Wired

The movie was set to be one of Hollywood’s epic disasters, on track to lose $100 million. “But a funny thing happened on the way to the cinematic scratching post. Word-of-mouth buzz began to build that Cats‘ numerous and not-inconsiderable quirks were, in fact, more fun than the sum of its filmmaker- and studio-intended entertainment value.” Viewers, many assisted by cannabis, “seemed to relish the collective joy of discovering a movie this bizarre in an era when Hollywood has never been more allergic to creative risk-taking. Repeat viewings became de rigueur.” – Vulture

The School of Architecture at Taliesin, which operated at both Wright’s original Taliesin home in Wisconsin and his Taliesin West in Arizona, will cease operations this June. The School’s board had tried, and failed, to complete an agreement with the Frank Lloyd Wright Foundation that would let it continue as an accredited program. (The Foundation’s press release pointedly stated that “the School did not have a sustainable business model.”) – Archinect

“Eight colorful banners designed [for the 1976 Bicentennial] by Alexander Calder that were lost for decades, then thought destroyed, and then serendipitously found and displayed for about six weeks a decade ago — only to vanish again from public eye and memory — have been found once again, and will be exhibited permanently in the Parkway Central Branch of the Free Library of Philadelphia.” – The Philadelphia Inquirer

When we “go to work” in the arts, we often mean actually going to an official and shared physical workspace. But there’s more and more opportunity and reason to cut the tether altogether — to abandon a shared, physical “home base” for an entirely remote or virtual work network that doesn’t have a street address. – Andrew Taylor

The largest potential casualty of the closings is the Hong Kong Arts Festival, which is scheduled to open on February 8 with the Hong Kong Sinfonietta’s world premiere of Alexander Goehr’s The Master Said at City Hall. – Musical America 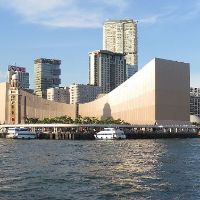