The Victorians were not, in fact, all that prudish. They had, as Kathryn Hughes explains, other reasons to hide their bodies.

Matt Burriesci, executive director of the Providence Athenaeum: “If we’d like to discuss metrics, deliverables and results, then we must ask how our interests have fared by employing this economic strategy. … Where, exactly, are the results? They are not to be found in the opinions of our policymakers”

“The move comes after HMV could no longer make payments on its crippling debt to the tune of $39 million. The chain was profitable up until 2013, but after a significant decline in sales it has not made a single payment on the debt since November 2014.”

Two cognitive researchers explain how people’s conceptions of what’s average or typical and what’s ideal bleed into each other and change what gets considered “normal.”

“Twitter hashtags and Change.org petitions can be blunt instruments, even unfair ones based on misunderstandings or simplifications, but, on its good days, social media is remarkably effective at speaking truth to power. People cossetted by their privilege can be quickly forced to recognize what it feels like at the bottom of the heap.”

Well, this is cheery: “Judging by the totals in Park City this year, buyers are feeling optimistic. Very optimistic. Whether it’s traditional players like Searchlight and Sony Pictures Classics, newer movers-and-shakers such as Amazon and Netflix or even upstarts like Neon and FilmRise, wallets have been opening up over the last week at Sundance.”

Raw ambition wrapped in hoodies and pearl earrings, of course.

Riva received an Oscar nomination for her work on Amour. “‘[Amour] is such a wonderful, marvellous, extraordinary gift,’ she said in 2012. ‘I cannot tell you how happy I am. Completely happy. The whole thing is like a fairytale.'”

“Many gestures were modest, but in sum they revealed that the advent of the Trump presidency is no ordinary moment in American cultural life.”

For instance: “Religious art from the 16th and 17th centuries includes gorily realistic sculptures of the dead Christ covered with blood and faces of the Virgin apparently shedding wet tears: to animate such statues was just another way to awe and move the Catholic pious.”

The statement from The Academy is mild but firm: “As supporters of filmmakers — and the human rights of all people — around the globe, we find it extremely troubling that Asghar Farhadi, the director of the Oscar-winning film from Iran, ‘A Separation,’ along with the cast and crew of this year’s Oscar-nominated film ‘The Salesman,’ could be barred from entering the country because of their religion or country of origin.”

David Lynch, who directed him in The Elephant Man, called him “simply the greatest actor in the world.” He made a thriving, and unusual, career in theatre, film, and television playing characters from Quentin Crisp to Caligula to Raskolnikov to Winston Smith to (for Mel Brooks) Jesus. 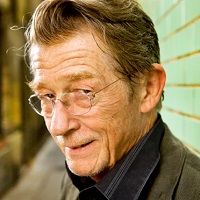