Classical Greek and Latin writing didn’t use punctuation at all, or even spaces between words; that sort of thing was left to the person who’d be speaking the text. St. Isidore of Seville systematized punctuation in the seventh century, but there were only three marks. “Over the following centuries, the existing punctuation marks became increasingly differentiated in order to prevent confusion. At the same time, new marks such as the question mark … arise when a lack of clarity needs to be redressed, communication controlled and sense disambiguated, an emergency perhaps stemming from greater reliance on written diplomacy as well as the newly fashionable art of letter writing.” – History Today

A 2018 study published in the journal Nature Climate Change announced tourism alone—that’s nonessential pleasure travel—is responsible for 8 percent of global greenhouse gas emissions. The traveling public is freaking out. It knows about flight shaming; it loves Greta Thunberg; and it’s ready to bid au revoir to Volvic, Dasani, and plastic straws. But it still wants to sit on a beach in Aruba. – The New Republic

The heart of the problem is the industry — the critics, agents, publicists, book dealers who were responsible for this project. They’ve shown just how little they know about the immigrant experience beyond the headlines. So we are left with this flawed book as our model, these damaging depictions at a time when there’s already so much demonizing of immigrants. – Los Angeles Times

Sometime between 1985 and 1988, a thief took a five-century-old Latin copy of Christopher Columbus’s first letter to King Ferdinand from Venice’s Biblioteca Nazionale Marciana and replaced it with a forgery. Art detectives in Delaware tracked it down; authorities won’t reveal where it was found or how it was seized. – The Philadelphia Inquirer

Long one of the stingiest states in terms of support for the arts, Georgia is now virtually at rock bottom, not willing even to put up enough money to collect the full amount of matching funds available from the National Endowment for the Arts. This year’s grants fall $300,000 short of the NEA’s allocations. – ArtsATL

When the actor playing Lady Macduff injured her knee a few minutes into a performance at the Watermill Theatre in England, the production stopped – until a woman who toured nationally as Lady Macduff last year, and who happened to be in the audience, stepped in. Emma Barclay “will continue in the role for the next few performances” as well, the theatre announced. – The Stage (UK)

The St. Paul’s Park Square Theatre had a budget issue due to expected donor funding shortfalls and lackluster ticket sales. Now it has a leadership issue. “For ‘at least two years,’ Park Square will be in the unusual position of being an arts organization without a full-time artistic leader, Mattessich said. Board members plan to arrive at a solution this weekend at a retreat, he said. The plan is to create an ‘artistic committee’ — made up of Park Square staffers and Twin Cities theater artists — that will be involved in season planning, … working with collaborators and overseeing productions.” – The Star Tribune (Minneapolis)

This move has “raised a business question about what kind of platform Amazon wants to be.” In part, it’s problematic because Amazon bought the big review site Goodreads in 2013. One writer and publisher says, “If they want to keep the discussion about race and appropriation out of their website, that’s certainly their right. … But because they have invited this social function into their retail business, it feels a little like dirty pool to a lot of us in the industry.” – Marketplace

Not to be confused with the autobiographical Shia LaBoeuf feature Honey Boy, of course. But seriously: The film, a documentary about a woman in North Macedonia living in isolation with her dying mother and keeping bees – and what happens when a Turkish family moves in next door – is the first film nominated both for best documentary and best international feature. A.O. Scott chose it as the best movie of 2019. – The New York Times

In the heart of Chinatown, the collection was central to the history of Chinese Americans – and, because the building is structurally unsound, no one can go in to retrieve the water-soaked items to save at least some of them. “Among the thousands of items in the collection believed to be lost is a document from 1883 about the Chinese Exclusion Act. Other irreplaceable pieces included the carefully written letters of bachelors working in the United States to send money home ‘even though they didn’t live a full life because of discrimination,’ said Ms. Maasbach; traditional wedding dresses from the early 1900s known as cheongsam; items brought by emigrants in suitcases that in some instances were later left anonymously outside the museum’s front door; and photographs from Chinatown in the 1980s.” – The New York Times

Jimmie Allen, who hit the charts with “Best Shot” in 2019, says, “I was excited and a little sad to be the first Black artist to launch a career with a number one in country just because of the year it is.” – BBC

Combining recent controversies – a statement King made about the Oscars and the reaction to American Dirt – author Alisa Valdes-Rodriguez explains what publishing is like for many Latinx writers. “MODERATOR: Hello, ladies and gentleman! Thank you for coming to the event today. As you can see, we have here with us today one of the nation’s leading white voices, the white male ‘writer,’ Stephen – hold on. I’m not sure how to pronounce your last name. Do you say it with a British accent? (Purses lips like the Queen’s arsehole, LAUGHS.) ‘King.'” – Alisa Valdes-Rodriguez

His theory of disruptive innovation made him a key influence on Silicon Valley powerhouses like Netflix and Intel and twice earned him the title of the world’s most influential living management thinker, died Jan. 23 at age 67. – Deseret News

“However difficult to imagine, across those eventful decades, countless people embraced the idea that what happened in the concert hall and the opera house was inseparable from the destiny of the United States and the well-being of the American people.” – Washington Post

“The 20th century economy rewarded being the same, suppressing whatever made you weird and interesting. But this economy doesn’t reward that. This economy has shifted far more in the direction of rewarding uniqueness. So broadly speaking, more passion is more possible.” – Chicago Reader

Under the Trump Administration, the challenge for cultural workers who agree to participate in official events is akin to swimming upstream in boiling waters. Civil servants, thinking of the long game—the point in the future when Trump will be gone and our democracy will be restored—task cultural workers with creating a counter-narrative of America while their employer puts forth a pernicious, deleterious version of the country. But how will this anticipated moment of restored democracy arrive if we behave as if events unfolding in this country were normal, as if our collective house were not on fire? – The New Yorker

“Since the dawn of the internet, the problem of phony art being sold has only grown, experts say, and the primary coin of the forgery realm has long been the fake print, which is relatively easy to create, often difficult to detect and typically priced low enough to attract undiscriminating novice buyers. But now the problem seems to be escalating, according to law enforcement officials in the United States and Europe.” – The New York Times

“Researchers at InsuranceProviders.com analyzed data from the Occupational Information Network, a national organization developed through support from the U.S. Department of Labor …, to determine the 20 most physically demanding jobs in the country. They analyzed the level of strength, stamina, flexibility and coordination required for a host of jobs, and each category was assigned.” Dancer tops the list with 97 points out of 100. (Athlete came in third.) – Dance Magazine 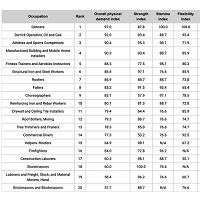