According to the Fox News theory of art, an artwork’s primary purpose isn’t to awe, inspire, or delight, let alone challenge your understanding of the world, but to serve as an expression of partisan allegiances; that you might also get a kick out of looking at it is more of a perk. On Fox News, the suggestion that a statue of a Confederate general who fought and died for the cause of chattel slavery doesn’t belong in public makes you a censorious triggered lib trampling on the Constitution, but an elected official who tears down a teenager’s painting acts in the name of human dignity. – The Baffler

“Banksy is a talented graphic designer with a flair for self-promotion, no more or less. He is not an artist. His work lacks the breadth and ambiguity to carry multiple interpretations vital to serious art. Banksy makes one-liners that are mildly amusing, sometimes clever, but never more than one-liners. There is a place for comedy and satire, but mistaking that for art or insightful social critique is foolishness.” – The Critic

We are now in the mature stage of a book-to-film boom that is quietly transforming how Americans read and tell stories—and not for the better. The power of this force is hard to quantify because intellectual property is now being bought in Hollywood in such unprecedented volume and diversity of source material. Almost all written works that achieve prominence today (and many more that don’t) will be optioned, and increasingly it is becoming rare for film and television projects to move forward without intellectual property attached. – The Baffler

“The messages conveyed through disinformation range from biased half-truths to conspiracy theories to outright lies. The intent is to manipulate popular opinion to sway policy or inhibit action by creating division and blurring the truth among the target population.Unfortunately, the most useful emotions to create such conditions – uncertainty, fear, and anger – are the very characteristics that increase the likelihood a message will go viral. Even when disinformation first appears on fringe sites outside of the mainstream media, mass coordinated action that takes advantage of platform business models reliant upon clicks and views helps ensure greater audience penetration.” – Weapons of Mass Distraction (US Department of State) 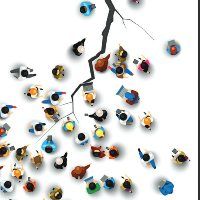