Marie Mullen – star, then and now, of The Beauty Queen of Leenane – talks about what she did and didn’t borrow from her colleague, fellow Tony-winner and predecessor as Mag Folan, the late Anna Manahan.

The Dresden Staatskapelle is 458 years old; the Royal Danish Orchestra (in Danish, the “Royal Chapel”) is a century older still. The Budapest Festival Orchestra, on the other hand, was founded in 1983, and many critics and listeners consider it to be easily a peer of the Dresdeners. Andrew Mellor considers the ways in which an orchestra’s institutional history might or might not affect how it plays today.

“For better or worse, we must accept that civility ‘does not exist outside of politics as an independent force,’ … but rather is just as much the ‘subject of political struggle’ as everything else.”

“The Museum of Modern and Contemporary Art in Nusantara (Museum MACAN), the first institution of its kind in Indonesia, has announced that it will officially open to the public in Jakarta in November 2017 after delays in the construction of [its] landmark multi-purpose building.”

What will we mean when someday we refer to Obama Lit? I think we’ll be discussing novels about authenticity, or about “problems of authenticity.” What does that mean?

“Money taints everything, why not writing too? Once its value is determined by the marketplace rather than the writer or the reader, our relationship to literature becomes estranged. From bloated celebrity advances to rejected masterpieces, the market is more than just a poor arbiter of lasting quality: it tends to obscure that quality behind purely economic motivations. Good writing, we’re told time and time again, is born from love, not avarice. But this romantic picture of the writer, toiling without regard to money, is itself a fiction—one whose roots stretch back several millennia, and whose effects we’re still dealing with today.”

The pick meant that Exposition Park keeps on transforming into less open space than building space, but it “also played to — and in the end confirmed — certain ideas Los Angeles has about itself, that it’s a city without a robust culture of civic engagement, that builds first and asks questions later, that pounces on opportunities like the Lucas Museum of Narrative Art rather than debating them.”

Joseph Boyden got attention for his First Nations ancestry and for his writing about Native peoples for years – but since Dec. 23, the calls for him to be clearer about his specific ancestry and stop claiming to speak for Canada’s aboriginal people have grown clamorous.

“Secular and religious, critic and journalist alike have summoned the term to deride and outright dismiss entire areas of research and technology, including stem cells, genetically modified crops, recombinant DNA, geoengineering, and gene editing. … To urge against playing God … is to convey a mistrust of scientists – and to criticize their arrogance in the face of the power and unpredictability of nature.”

The legendary art collection in Philadelphia has an in-house curation team planning the events, “aiming to elucidate the paintings and sculptures while exploring the concepts behind them.” For one of the series, the museum is even assembling its own ensemble “for intensive two-weeks-or-more workshops and performances [exploring] complex modern works.”

“In the last century, originality has killed one once-flourishing art form after another, by replacing variation within shared artistic conventions to rebellion against convention itself. The moment artists were taught to consider themselves superior mutant creative geniuses rather than practitioners of traditional crafts, it was only a matter of time before some would get tired of creative variation within the inherited conventions of their art and start rejecting the basic conventions.

“As he saw it, that job, teaching, was his main job. Most of us think of him preëminently as a choreographer, but he insisted that he was above all a teacher. Class or not, he said that all dancers had to do a complete barre (supported exercises, executed while holding onto the rail) every day. It was like brushing your teeth, he said. You didn’t think about it; you just did it.”

“Reflecting on the history of logic forces us to reflect on what it means to be a reasonable cognitive agent, to think properly. Is it to engage in discussions with others? Is it to think for ourselves? Is it to perform calculations?”

The combination of miniature, struggling, and titanic companies makes for an operatic ecosystem that is as rich as it is fragile. The question is: can the city sustain it?

“Mr. Greco mixed talent, tenacity and a hot temper in a career that lasted more than 80 years. He was an oft-married ladies’ man and almost but not quite a member of the Rat Pack, the high-living gang of entertainers surrounding Frank Sinatra and Dean Martin that embodied the extravagance of Las Vegas in its glory days.”

Phylicia Rashad. Laurence Fishburne, Leslie Uggams, Ruben Santiago-Hudson and others talk about their first exposure to the playwright’s work and the first time they appeared in one of his plays themselves.

The Met sent Pretty Yende over to sing “Una voce poco fa” from Barber of Seville, and both the studio audience and the Twitterverse were thrilled. “The question is, did the diva appearance foster any new opera fans, or was this just hopeful thinking?” Michael Vincent considers.

Apple Inc. is planning to build a significant new business in original television shows and movies, according to people familiar with the matter, a move that could make it a bigger player in Hollywood and offset slowing sales of iPhones and iPads.

For example:
“Expectation: The American dance community is super competitive and hardcore.
Reality: Coming from a world of Russian discipline, I was surprised to find out how joyful American dancers, choreographers and teachers are about what they do.”

“Trumpism – a blanket term I’ll use in this piece to reference the election of the former Apprentice host, the struggle to come to grips with [the] election, and the ever-expanding list of concerns raised by his impending presidency – is such an overwhelming phenomenon that it’s … hard to ignore in a way that’s so massive, it needs to be broken down into categories to be properly understood.” So Jen Chaney does.

What a change from the strike back in 2010! The three-year agreement includes a bit more money for players, more flexibility, and a brand-new stipend.

The museum had hoped to open the extension to its main building for its 150th anniversary in 2020; now even the groundbreaking is seven years or more away.

“The [18-month] restoration has systemically treated all of the bridge’s structural elements for the first time in more than 400 years.” (vandals have already tagged it with graffiti, alas.)

Two of the many dance performances that the week in the wake of New Years Day. … read more

Alexis Solis makes a point today in The Guardian that the driver behind Broadway’s record year at the box office is its variety of shows appealing to all sorts of audiences.

Certainly even a casual look at current offerings indicates the variety. Someone who would never set foot in Aladdin might be enticed by Dear Evan Hansen. A ticket buyer who wouldn’t go for A Bronx Tale could have a fine night at Jitney. And vice versa. Everyone loves Hamilton. Some people have even enjoyed Paramour. And while the spring lineup is light on original works, there’s still plenty to choose from among the likes of Come from Away and Groundhog Day, The Play That Goes Wrong and The Price, Oslo and Hello, Dolly!

But it’s not just Broadway that’s seeing a boom in ticket sales:

The answer probably relies on both the type of entertainment Broadway has been offering and the new strategies it has found to price and sell its wares.

Theatres have got a lot better at variable pricing to maximize revenue. But success breeds success writes Solis. When a show becomes popular enough that it enters the consciousness of the broader culture, it boosts the whole art:

Though these upward trends were set in motion years before the appearance of Hamilton, that show has helped to return theater to a more prominent place in the cultural conversation. Those who can’t score tickets to that show may still feel they ought to see something in New York (it’s during tourist-heavy holiday weeks that Broadway scores its best numbers) or catch a show when it comes around on tour. And the success of Hamilton may steer producers toward independent, idiosyncratic art with which theater frequently revives and reinvents itself.

It’s not just about ticket revenue. It’s about relevancy of the art form. Transcendent art causes people to look at theatre differently. But these moments are rare. There’s only one Harry Potter. And only one Hamilton? Does Solis’s observation about Broadway’s variety suggest that there may be enough diversity to produce the next transcendent work?

“Is it crazy to think the younger black postmodernists — these interrogators of blackness, these satirists of race — have an intellectual luxury afforded them by Wilson’s dogged devotion to place and history? What made Wilson such an Olympian figure was that he could fit the whole country in an office or a backyard and make the bigness of his ideas seem life-size. As for what he would have had to say about this mutability matter? I’d like to think he’d probably have written a play about it.”

“Balshaw has been director of the Whitworth Art Gallery since 2006. She became joint director of the Whitworth and the Manchester Art Gallery in 2011. In 2014, she in effect became Manchester’s cultural attache when she took on the role of strategic lead for culture at the city council. At the Whitworth, Balshaw has led the much-admired £15m redevelopment of the gallery, helping to breathe new life into the collections and dramatically increasing visitor numbers. It won the 2015 museum of the year prize.”

“Lucas’ personal collection of fine and popular art, including ephemera related to his “Star Wars” franchise, will fill a futuristic-looking new museum planned for L.A.’s Exposition Park, which beat out a competing design for Treasure Island in San Francisco Bay. The rivalry had pitted the two cities in the competition not only for Lucas’ collection and the tourism it will bring, but also for the thousands of jobs that backers said the project will create.” 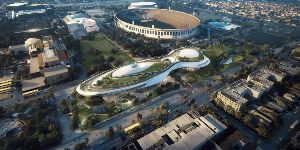