The composer, Mohammed Fairouz, wanted to bring out every Trump similarity possible. The (in effect) executive producer, Francesca Zambello, insists, “It is not about the president-elect or his wife.” The librettist originally had in mind the late Pakistani dictator Zia ul-Haq. And director Ethan McSweeny said, “We were all joking among ourselves that if that guy Trump got elected, this would be the most politically prescient piece of opera ever produced in America. Well, that happened.”

“Writers know so little about how other writers make ends meet that it’s difficult for them to have much perspective on their own ability to do so.”

“At a media preview on January 9,” writes Sarah Rose Sharp, “the Detroit Institute of Arts introduced Lumin, a new interpretive guide developed in partnership with Google and an augmented reality (AR) platform creator called GuidiGO. Subsequently, a tempest of conflicting emotions was triggered in the soul of this arts writer.”

“Inspired by [Claire Fuller’s] Swimming Lessons, we went to the experts in unexpected ephemera and well-loved books – librarians – and asked them to tell us the most interesting thing they’d found in a library book. Their answers delighted, disgusted, and exceeded our wildest expectations. It was hard to pick our favorites, but here they are.”

The president of a historically black college whose marching band will be there says, “We feel the inauguration of a new president is not a political event but a civil ceremony celebrating the transfer of power.” Alyssa Rosenberg takes apart the premises behind that position.

Robert Moody joined the orchestra in 2005; he says that he and the board “all felt really strong in our belief that a decade, give or take a few years on either side, was about the right amount of time.”

Sundance finds itself navigating some unusually slippery terrain this year. Mr. Redford, who recuses himself from programming decisions, bristles when his festival is seen as having an agenda. “We don’t take a position,” he insisted. At the same time, his top programmers, John Cooper and Trevor Groth, say they are taking a specific stance, one that is political by nature: For the first time in the festival’s history, there will be a spotlight on one theme — global warming and the environment. Their goal?

“It was a diverse scene that held out a hint of utopian promise at a time when Abstract Expressionism was waning and new categories had not yet hardened: It included many more women than the uptown art world; it was not completely white; abstraction and figuration jostled side by side (if not always comfortably), along with genre-bending sculpture; and the gloriously messy birth of modern performance art took place in the midst of it all.”

Nicholas Shaw of Harrods Estates said it was “the most expensive box we have ever offered for sale”. The box is on the western side of the auditorium and has approximately 849 years remaining on its lease.

“From clues to his cancer hidden in Blackstar‘s artwork to his mortal fear of Tina Turner, some astounding new Bowie facts have come to light over the last year.”

“Every major publishing house has a conservative imprint — Penguin Random House has two, Sentinel and Crown Forum — and maintains a stable of right-wing authors who may not attend literary festivals or mingle at the National Book Awards but command a sizable audience in red state America. Most mainstream publishers try to claim partisan neutrality and publish books across the political spectrum. But occasionally, publishers get dragged into a political scrum.”

“The filmmaking brothers are partnering with Annapurna Television on Western anthology The Ballad of Buster Scruggs. The duo, who wrote the script based on an original idea, will direct the project.”

“The tiff spiraled out of control Tuesday, with House Republicans acting on two separate occasions to pull the artwork down from a tunnel in the Capitol complex, after it was rehung by Rep. William Lacy Clay (D-Mo.), whose young constituent painted it.”

Conductor Teddy Abrams: “I thought, ‘wait a minute, instead of focusing on how to get a larger share of the state budget — which by the way is next to nothing; I think we get $30,000 from the state —  maybe we should focus on getting an orchestra to serve the entire state and start using culture to break down some of these divides ….  Because this just can’t go on. It’s ridiculous: Here are people living right next to each other who can’t have a meaningful dialogue, and who assume nothing will ever change. So I keep thinking, ‘what can I do about that?’”

Elizabeth Landau: “Otherwise reasonable people enact all kinds of rituals to promote good luck or cast off the bad, especially in situations of uncertainty. Three different Facebook friends of mine say they touch the outsides of the airplanes they are boarding before takeoff. Chimney sweeps are considered good luck in Germany, and another former colleague of mine would try to touch them when she was a girl growing up there.” What’s behind this is something called “embodied cognition.”

The director of the Elbphilharmonie says that tickets to performances by resident ensembles, touring orchestras like the New York Philharmonic and Chicago Symphony, chamber music, new music and jazz alike are all bought up within hours. He’s even selling “blind date” tickets to concerts by artists to be named later – and people are buying those, too.

“The architects trick visitors into the daunting [eight-story] climb by changing the subject with a fun house of surprising events. The entrance leads past a decorative digital wall to a long ride on an escalator through a tunnel spotted with mirrored discs. Visitors land at a wide terrace, … [and] another escalator leads to an outdoor piazza … [which] marks the start of a modern version of the Spanish Steps in Rome.”

“The Sacramento Ballet board of directors has announced the company’s 2017-18 season will be the last for co-artistic directors Ron Cunningham and Carinne Binda. … It will be their 30th season with the organization.” While Cunningham and Binda aren’t fighting the decision, they’re stating publicly that the board made it and they aren’t ready to go.

Teddy Abrams: “I thought, ‘wait a minute, instead of focusing on how to get a larger share of the state budget – which by the way is next to nothing; I think we get $30,000 from the state – maybe we should focus on getting an orchestra to serve the entire state and start using culture to break down some of these divides.’ Because this just can’t go on. It’s ridiculous: Here are people living right next to each other who can’t have a meaningful dialogue, and who assume nothing will ever change.”

Alexis Soloski: “What accounts for the remarkable rise in revenue and attendance … that the last several years have witnessed? The answer probably relies on both the type of entertainment Broadway has been offering and the new strategies it has found to price and sell its wares.”

What’s fear got to do with it?

In 2014 the Wyncote Foundation commissioned Lutman & Associates to research digital adoption by legacy cultural institutions. … When I spoke about the report at conferences and meetings, arts leaders’ responses were frequently that they knew they “should be” engaging digitally, but they feel overwhelmed about beginning. Surprisingly, the most frequent response from arts leaders was not excitement, but instead fear. … read more

We have recently upgraded to a new used car from a very (very) old used car. … Now, you might well ask, why am I writing about this in Engaging Matters? Anyone get there yet? Here’s the deal. … read more

Brace For More Bad News From The Metropolitan Museum

It’s coming – possibly Wednesday or Thursday of this week, though I doubt there will be any “announcement.” Rather, employees will learn of the museum’s financial outlook at a town hall meeting in the museum. … read more

What About The “Art Strike”? It’s Not So Simple

A group of artists, critics and gallerists have called for an art strike on Jan. 20. Inauguration Day. … They have every right to do so, and I have no quibbles if they want to. These are extraordinary times. But I do quibble with the idea that museums should join in – at least public museums. … read more

Morrison is not your typical moneyed patron. “I didn’t come from money and I didn’t have money and I wanted to live in New York!” she says. She runs her empire from a two-bedroom walk-up apartment in Flatbush, Brooklyn.

One bedroom in the apartment is for sleeping. The other is a workspace for her eight employees. “I’ve always run the business from my home, maybe much to the chagrin of my board,” she says. “For me, the decision is always really clear: I could spend $30 to $40,000 on an office space every year, or I could put that into a commission.”

She’s got the essential impresario gene:

Morrison says she follows her guts and her ears in her work. “I won’t do anything unless I’m mad crazy about the music and the composer and really feeling like they’re contributing something to the field that is different,” she says.

In a way, she’s the antithesis of institutional art. She works on a shoestring, makes things happen in makeshift ways, and relies on her gut for essential artistic judgments. There’s something authentic about her productions in a way that institutional art sometimes lacks.

As an aside – I love the NPR headline about the Morrison profile: “Meet The Producer Who Runs Her Opera Empire From A 2-Bedroom Apartment.” Empire? Seriously? It’s lovely to think that there could actually be something like an opera empire in this day and age.

“The creative industries are and will be at the heart of this government’s work on industrial strategy. It’s one of the major growth areas in the country and I want to assure you that I, Greg, the prime minister and others understand just how important our industries are to the UK economy.”  She emphasised the 1.9 million jobs in the creative sectors and the £87.4 billion the industries generate.

“Led by Harry Potter’s newest incarnation in a West End play, Rowling’s first screenplay and titles by diet and fitness guru Joe Wicks, annual book sales in the UK rose to just over £1.59bn in 2016, from £1.51bn in the previous year, according to the annual sales roundup from data specialist Nielsen BookScan. The number of physical books sold also rose, from 190m in 2015 to 195m, in the 12 months to December 2016.”

“The people credited for expanding the readership of books in Addis are the mobile vendors. They walk around with books in their hands stacked all the way up to their neck, approaching any and everyone to buy a book of them. There are close to 1000 mobile vendors roaming the streets of Addis.” 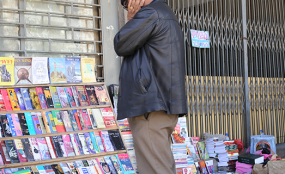