“The reality is, for our generation, if you care about the life of the mind, you’re just going to have to keep doing it, and who knows where you’ll be doing it? Is it going to be as an adjunct? On a tenure track? At Gotham Writers Workshop? As a journalist? As long as you can keep it going in your own head without going mad, you’ve got something.”

“On New Year’s Eve, the organization’s founder and executive director, Bryan Suereth, was officially dismissed by Disjecta’s board of directors, following disputes over his leadership and an eleventh-hour attempt by supporters to keep him at the helm.” Said disputes over Suereth’s leadership are by no means over, though even he and his supporters acknowledge that he can be confrontational.

“I stood like a tourist at the foot of Everest. The tower of music loomed forebodingly before me. I began with baby steps, playing piano records in the background as I went about the day, letting the tunes seep in by osmosis, not getting too close in case I scared myself off. Over the next few weeks the slow-drip method started to take and the music began to fall into place. Melodies untangled. Their logic unfurled. Basically, I listened, and listened again, until the music made sense.”

“There were so many instances, in the five or six years since I wrote it, where it seemed so close to being made. It’s the typical Hollywood story — everything falls apart. Every time, I would curse myself and go, ‘Goddamn it.'”

“When novelist Michael Cunningham got a call from someone claiming to be David Bowie, he thought it was a friend pulling a prank. He didn’t know he was about to be launched into a yearlong collaboration on a musical involving space aliens, mariachi bands, and an imaginary trove of unreleased songs by Bob Dylan.”

Markus Rhoten grew up in Germany with American parents who were professional musicians themselves. (He didn’t take up his father’s instrument, the trumpet, because “I was worried it would make me a bad kisser.”)

“Looking back now, it is astounding that the point that has so inflamed my academic critics was my claim that the Pirahãs lacked subordinate clauses. You would have thought I had spit on a crucifix during church. I had, of course, expected someone to point out flaws in my reasoning or to give clear examples of data that I had missed or to conduct field research to test my claims. This is the norm in academic debates. But in the first round of criticisms, lasting for five years, what came my way instead was mainly name-calling.”

“In its first major studio pact after getting investment from Univision last January, the satirical media brand has partnered with Lionsgate for a three-film development deal that runs through 2018.” (Don’t miss the quote from the Onion Studios VP.)

They passed on the book not out of any outrage at Milo’s flamethrowing (these are the people that publish Ann Coulter), but because they decided skipping the book was a good business decision. Katy Waldman got several of them to explain why.

And that would explain why he’s managed to produce more than 30 of them – in particular the chamber operas he writes between major commissions. “I’ve found that experimental theatre companies are prepared to take on these things, and it is a handy form to work in, not requiring huge budgets.”

Many countries have toyed with the idea of parting company with FM, but a combination of ageing equipment and geography mean Norway is particularly keen to replace its analogue FM system with digital audio broadcasting (DAB).

“There are now almost one million young people investing their free time to make art, and then better art with their friends. There are programs in Afghanistan, Palestine, and refugee camps in Europe; in slums of Manila, Rio and Nairobi; in a Maori community of New Zealand, and an Inuit community of Greenland. Wealthy cities like Los Angeles, New York, Paris, London, Stockholm, Vienna, and Hong Kong even have programs for children living in poverty. There are over 130 different programs in the US alone. Though the research is still scarce, it affirms the enthusiastic claims—intensive ensemble learning in the arts can, and does change the trajectory of kids’ lives.”

“It pays to remember that moviegoing is a social activity for vastly more people than it is a kind of religious experience, and that the respect you and I may feel ought to be accorded to the art on screen is by no means the same for most. If you think of a movie as nothing more than a diversion, why should you mind if your attention is diverted for a moment somewhere else?”

There are reports that “Google showed interest in purchasing the company. SoundCloud currently boasts more than 175 million users around the world. While Spotify may have purchased the company for its 2014 $1 billion price, Google may spend just $500 million. The Big 3 labels – Universal, Sony, and Warner – own stakes in SoundCloud Ltd. If Google purchases the music streamer, the Big 3 will get a windfall.”

“When thinking about fashion in philosophy, there are four basic categories under which texts, thinkers and ideas can be grouped. By considering the interrelation of these groups, we can begin to glean how an idea becomes fashionable. The four categories are the fashionable, the foundational, the prohibited, and the unfashionable.”

“This is a man who has always been obsessed with the entertainment industry—an aspiring A-lister, reality-TV show host, and Hollywood hanger-on. To mock the entertainment industry as out of touch with the will of the people, while praising a man who cared more about dating Salma Hayek than he’ll ever care about the average American, shows a fundamental lack of awareness.”

Importantly, “the more participants identified with the characters from the target out-group, the less prejudice they showed toward that group,” the researchers add. This points to the power of TV comedy to help viewers “understand, to feel similar to, and to feel more connected to” people they don’t necessarily come into contact with in their day-to-day lives.

Accordion? Yes, occasionally an orchestra has to find one, as when the Philharmonic did a Kurt Weill score last week. As it happens, there’s one guy who specializes in playing accordion with symphony orchestras.

Mark Harris, responding to Meryl at the Golden Globes: “I sympathize with anyone in showbiz currently trying to figure out whether the job is to make art for Trump’s America, or about Trump’s America, or about an America that Trump fails to see or to appreciate, or about an America that is not defined by the word ‘Trump’s’ or any other possessory modifier. In the first month of the Trump years, ‘Where do we go from here?’ feels like the right question for artists to ask.”

The SWOT analysis is a well-known and highly valuable tool for strategic planning. … Yet, I’ve found that there are four additional questions that deserve to be asked whenever undertaking a SWOT analysis … read more

The field is having a moment right now about the lack of black and brown people in American orchestras – on stage, backstage and in the audience. Some of the energy in the current moment can be … read more

I’ve just seen the trailer for La La Land (again), and now I’d like some of that at the theatre, please. Colourful, romantic, witty, blithe, with just enough melancholy to cut the sugar icing. … read more

Bill Evans, Some Other Time: The Lost Sessions From The Black Forest (Resonance) … read more

American universities are making big investments in new arts facilities. At least a half-dozen major projects are coming online this year. Why?

Schools now think of the arts less as a peripheral extracurricular activity than as an opportunity for innovative collaboration. At Stanford, for example, medical students examine the Rodin sculptures at the Cantor Arts Center to learn about conditions that afflict the hand. Meanwhile, Rice is due to open the Moody Center for the Arts next month, a $30m exhibition-cum-interdisciplinary laboratory space. “I’ve learned how important visual imagination is to thinking about science and engineering,” says David Leebron, the university’s president.

A few years ago Princeton announced it intended to be an arts destination. USC declares its desire to be known as an arts university. Duke and Stanford and Columbia all have the arts on their minds. Is there really such a demand?

The rising demand is leading schools that have traditionally marginalised the arts to enter a new kind of arms race. Princeton University in New Jersey “was losing students to some of our rival universities because we didn’t have the visibility in the arts that we should”, says Michael Cadden, the chair of the Lewis Center for the Arts, which anchors a 22-acre, $330m arts-and-transportation hub due to open in October. Princeton has 30% to 40% more students studying the arts than it did ten years ago, according to Cadden.

Arts facilities can have a tangible effect on the kind of talent schools attract. In the decade since Duke University in North Carolina opened the Nasher Museum of Art, it has seen a steep climb in arts portfolios submitted by prospective students, from 980 in 2006 to more than 2,800 last year.

The reality of the “arts boom” in universities is perhaps a bit more modest. There’s clearly money available to be raised for new museums and facilities. The buildings are prestigious and good campus eye candy that donors can attach their names to. But is there evidence yet of a similar uptick in the scale of investment in the arts programs?

“A quarter-century ago, psychologists began to point out important links between the development of scientific theories and how everyday thinking, including children’s thinking, works. According to theory theorists, a child learns by constructing a theory of the world and testing it against experience. In this sense, children are little scientists – they hypothesise on the basis of observations, test their hypotheses experimentally, and then revise their views in light of the evidence they gather.”

“I expected a cascade of clichés and prejudices: a maestro with no sense of rhythm who waves his arms as if washing an invisible car, audiences of stiffs and snobs, perhaps a new symphony that launches the composer into a life of nightly standing ovations and perpetual Champagne on tap. Three seasons later, I’m not just sold; I’m consumed with admiration.”

Get ready. “Publishers predict that this trickle of fictional responses to Brexit will turn into a flood by the end of 2017. ‘I suspect we will see a lot more Brexit or Trump-America books once we have all lived through whatever changes these may bring [this year],’ said Kirsty Dunseath, fiction publisher at Wiedenfeld and Nicolson.”

What cars may become is another sort of “third space” – that space traditionally occupied by cafes, pubs and other places where humans socialize. “Some companies have declared explicitly they want their cars to be the new third places. It’s a dramatic reinterpretation of what constitutes a social environment, and maybe not in a way we’re ready to accept.”

Basically, it’s an experiment: “Those buying tickets for Hamilton – one of the most highly anticipated shows of 2017 – will only receive a hard copy of their ticket when they arrive at the Victoria Palace Theatre.”

A grim analysis from Britain: “Let’s face it: art and serious culture are completely marginal to American life. Trump’s victory proves that. Closing museums is not likely to have any impact on those who support him. With all due respect, they might be affected a lot more if reality television shows went on strike.”

The deal with London-based Ambassador Theatre Group comes with a 40-year lease and both Emerson and ATG making capital investments in the 117-year-old building – and the revitalization of a theatre that’s been dark for more than a year. 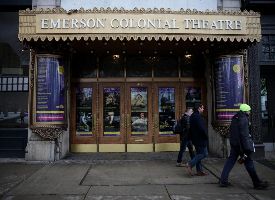