“When I suggest to Gladwell he has an unusually relaxed attitude towards criticism, he returns to a theme from the night before: success is wasted on the successful. ‘The weird thing about people who become successful is that they don’t understand that they now have the freedom to let their guard down: you know – it’s fine’.” – New Statesman

A tour of some of the many paintings created in 1924. – Hyperallergic

“Whether Jo is tackling Amy for a most grievous sisterly infraction or the sisters are tumbling over each other to get ready for a party, Gerwig keeps the sisters in constant, surging motion. That energy explodes in the film’s dance scenes, which happen in sweaty, crowded beer halls, proper Paris ballrooms and even on a snow-covered porch. For the swirling dance sequences, Gerwig and her cast got a big choreographic hand from San Diego’s Flannery Gregg.” – Los Angeles Times

Pronouns, along with conjunctions and prepositions, are generally considered a “closed class” – a group of words whose number rarely grows and whose meanings rarely change. So when pronouns take center stage, especially a new use of “they” that expands the closed class, linguists can’t help but get excited. – The Conversation

The Artistic Genius is male because men are most fit to be Artistic Geniuses. The goalposts of greatness are hyper-specific, socially manipulated, and ultimately less interested in the aesthetics of the work produced. And they are seldom scrutinized. – Paris Review

Taking into account that actual tuition and fees are already essentially free, could there still be significant effects when students know for certain that their schooling will cost nothing? Yes. – The Conversation

Walker has emerged as one of the country’s preeminent voices for the arts, and social justice, and for new strategies to ameliorate inequality. He has delivered the annual Nancy Hanks Lecture sponsored by Americans for the Arts and was the subject of a glossy profile in the New York Times titled “The Man With the $13 Billion Checkbook.” And in September, the National Gallery of Art announced that Walker would be joining its board, one of the smallest and most exclusive governing bodies in the art world, with only nine members, four of them ex officio positions, including the chief justice of the United States and the secretaries of the Treasury and State departments. – Washington Post

The direct legacy of the ancient Iranians can be found across the Middle East, the Caucasus and Turkey, the Arabian Peninsula and Egypt and Turkmenistan, Uzbekistan, Afghanistan, India and Pakistan. – The Conversation

Starting in the early 1970s, Baldessari became one of the first professors at the California Institute of Arts, a school in Santa Clarita that became a locus of artistic experimentation on the West Coast when the art scene there was perceived as less significant than New York’s. Baldessari, famously, taught a class whose name signified a lot: “Post-Studio Art.” – ARTnews

And David Shariatmadari means those scare quotes. In this excerpt from his new book Don’t Believe a Word, he takes apart what he calls “the cult of untranslatables,” taking apart some regularly cited examples of such words and arguing that the mystique around them has some genuinely pernicious effects. – Literary Hub

Muralist James “Yaya” Hough, 44, was released last year after 27 years in prison, and within a few months he was hired for the new artist-in-residence position in the office of reformist Philadelphia District Attorney Larry Krasner. “Hough told Hyperallergic that he was looking to program workshops that will foster conversations between the DA’s 600 or so employees, survivors of crimes, and those currently serving time in the criminal justice system.” – Hyperallergic

The lack of progress in adversarial philosophical exchange might rest on a simple but problematic division of labour: in professional settings such as talks, seminars and papers, we standardly criticise others’, rather than our own, views. At the same time, we clearly risk our reputation much more when proposing an idea rather than criticising it. This systematically disadvantages proponents of (new) ideas. – Aeon

“First published, in English, in 2008, [Mohammed Hanif’s] A Case of Exploding Mangoes is a dark satire about the possible reasons for the death of [dictator] General Zia [ul-Haq] in a plane crash in 1988. Featuring bumbling generals and homosexual romance, it was shortlisted for the Guardian first book award, longlisted for the Booker and won the Commonwealth prize for best first novel.” The Urdu translation of the novel has just been released, and men claiming to be from the Pakistani military spy agency ISI raided the Karachi offices of the book’s publisher, seized all the copies, and demanded a list of booksellers who had ordered it. – The Guardian

Artists are expected to make work about fighting climate change and fascism, or promoting gay rights, Piotr Bernatowicz says. “Artists who do not adopt this ideology are marginalized,” he said. Bernatowicz wants to change that and promote artists who have other views: conservative, patriotic, pro-family. His plans are transforming the museum into the latest battleground in Poland’s culture wars, which pit liberals against the governing populist Law and Justice Party, as well as other conservative groups. – The New York Times

“[The museum] has invited the illustrator Jean-Philippe Delhomme to take over its Instagram account every Monday during 2020. On the account he will post a different drawing each week, depicting an artist as a contemporary social media user.” – The Guardian

She had two hits onstage (Murray Schisgal’s All About Town and Terrence McNally’s The Ritz) and numerous flops, adoring profiles in The New York Times and People magazine, three criminal trials, a total of 14 years in prison, Roy Cohn for a lawyer and Jean Harris for a cellmate, and a mountain of Ponzi schemes, fraudulent businesses, and lies (not least her age). – The New York Times

“The sepulchre of Frederick (Friedrich) III, emperor from 1452 until his death in 1493, the greatest monument in Vienna’s cathedral of St Stephen’s, in the city’s historic centre, has been shown to contain his enamelled gilded crown and imperial regalia.” And this has been revealed without opening the tomb, whose cover weights eight tons. – The Art Newspaper

“[Samantha] Barbash alleges her character and likeness have been exploited and is seeking $20m compensation and $20m in punitive damages. Court documents show Barbash is targeting production company STX and Lopez’s own Nuyorican Productions.” – The Guardian

“One series will include books for middle-school readers inspired by Time Trials, a set of videos from the National Museum of American History that introduces figures from the past, like the traitor Benedict Arnold and the abolitionist John Brown, and encourages the audience to discuss their actions. Other series will draw upon the cultural and scientific knowledge of the Smithsonian.” The project is a partnership with IDW Publishing, which has already produced graphic memoirs by Congressman John Lewis (about the civil rights movement) and George Takei (about his family’s time in a World War II internment camp). – The New York Times

“The film entitled The First Temptation of Christ, by the Brazilian production company Porta dos Fundos, came out on December 3 and drew strong criticism from conservative politicians in the mainly Catholic country, the church itself and from evangelicals. … Judge Benedicto Abicair said Wednesday he was ordering the film yanked for now so as to calm tempers until courts can consider the broader merits of a suit against the movie brought by a Catholic association called the Don Bosco Center for Faith and Culture.” – Yahoo! (AFP)

Gina Gibney’s ever-expanding organization already operates two buildings (which include five theaters, 23 studios, a conference room and a media lab), a six-member dance company, and several performance-and-social-justice projects. Now a $2 million grant will support doubling the number of company dancers, forming what Ms. Gibney hopes will become a troupe on the lines of Nederlands Dans Theater and Ballet BC. – The New York Times

“Jecorey Arthur uses his extensive knowledge of music to educate kids, entertain people of all ages, and give back to his community. He performs and records his own music under the name 1200, teaches at Simmons College of Kentucky, and brings music education to Louisville public schools. As an artist, his music is genre-defying and experimental, combining classical and hip-hop. … On top of his many musical endeavors, Arthur is engaged in on-the-ground social justice work in West Louisville, including the Parkland neighborhood where he grew up.” – PBS NewsHour (KET)

“These are the works of Mario Moore, a 32-year-old Detroit-born artist who recently painted a series of portraits honoring the African American service workers on the Princeton campus, where he has just completed a year-long fellowship. The project was inspired by Moore’s father, a former security guard at the Detroit Institute of Arts who had a ‘hard-working, industrial belt-type of mentality,’ according to Moore.” – artnet

“Theatre artist Michael Cotey was in rehearsal at the Goodman Theatre when the news of the devastating Parkland shooting broke. ‘I started thinking about ways theatre artists could respond to this,’ he recalls. Partly inspired by Tectonic Theater Project’s The Laramie Project: 10 Years Later reading series, in which he was involved, Cotey created the #ENOUGH: Plays to End Gun Violence initiative as a way to galvanize a nationwide dialogue around gun violence. Throughout 2020, #ENOUGH plans to provide a platform for middle and high school students across the country to create 10-minute plays exploring the impact gun violence has on their lives and communities.” – American Theatre 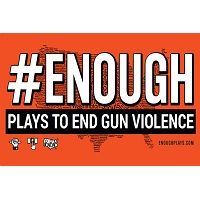