“Any man who’s ever killed a chicken knows that it’s best not to look it in the eye. [With his Sportsman’s Notebook, Ivan] Turgenev forced his fellow landowners to do that, look the serfs in the eye. Alexander II acknowledged the role these stories played in guiding him to issue the Emancipation Edict that freed the serfs in 1861.” – Literary Hub

Some film critics now differentiate themselves from amateurs through the practice of Extreme Film Criticism. In it, critics subject themselves to physical, film-related challenges that bear little resemblance to long-form criticism of decades past but would nonetheless intimidate most amateurs. Then they write about it. Landing somewhere between product placement and a fraternity hazing ritual, these pieces constitute a response to major shifts in the landscape of both the news media and the film industry, with serious implications for the life expectancy of criticism as a form, and perhaps for the individual critics themselves. – Los Angeles Review of Books

American Historical Association meetings aren’t known for rousing policy debates. At this year’s gathering, however, there was a sense that historians’ perspectives are sorely needed in current policy discussions — and that historians are increasingly willing to step up. – Inside Higher Ed

Languages do exist, but they are not necessarily the things we take them for. On the one hand, we each have an understanding of at least our mother tongue that allows us to produce sentences in it according to certain rules. I say “I kicked the ball” not “the ball kicked I.” That knowledge of rules in our brains is one part of the reality of a language. The other part is its existence as an autonomous system, a means of communication whose form is negotiated between speakers. It is not fixed, but changes as it is used in millions of separate interactions. – Paris Review

“I was doing text and photo paintings and paintings solely with text. I had ignored photography for a long time, thinking it was a high school infatuation, but now I had this idea that I would do visual note-taking. I would go out with my camera and take photographs of things that might be information for my paintings. Then I got another epiphany. I asked myself: Why do I have to translate all of this information into painting? Why can’t it be art in itself?” – Los Angeles Times

The glasses are aimed at D/deaf audiences and offer personal captioning, flashing the production’s dialogue in front of the wearer’s eyes as the actors say it. They were developed by the NT and introduced in 2018, but will now be used at the London Short Film Festival for screenings of works by emerging directors, including Maxine Peake and Lena Headey. They will be used across four screens at the BFI Southbank. – The Stage

Relaxed performance — an approach to performance that challenges what have developed as strict expectations and codes for audience and performer engagement and behaviour — is making theatre and other types of live performance like fashion shows and musical events more accessible. – The Conversation

Yuan Yuan Tan wasn’t even intending to join the company back in 1995, but no principal dancer in the history of the company has lasted as long. – San Francisco Chronicle

Pugh founded Ballet Memphis in 1986 with two dancers and a $75,000 budget. The organization grew over the years and now has a company of 21 dancers and a four-million-dollar budget. It also performs a full season in Memphis and tours nationally and internationally. – The Commercial Appeal

Yes, classical music types have rolled their eyes at dead-Maria Callas and dead-Glenn Gould tours, but rock is another matter. Since the long-departed Tupac Shakur (re-)appeared at the 2012 Coachella Festival, the field has grown, with recent concerts by the images of Buddy Holly, Roy Orbison, and Frank Zappa posting impressive ticket sales and a full tour by a reanimated Whitney Houston coming this year. And with the acts that form the bedrock of the live music touring business made up of people now in their 60s and 70s, and with recently-dead stars like Prince and David Bowie still having legions of fans, the musical hologram business may soon be booming. Reporter Mark Binelli watches the hologram creators at work. – The New York Times Magazine

None of us are good listeners all the time. It’s human nature to get distracted by what’s going on in your own head. Listening takes effort. Like reading, you might choose to go over some things carefully while skimming others, depending on the situation. But the ability to listen carefully, like the ability to read carefully, degrades if you don’t do it often enough. – LitHub

“Some grew up functionally bilingual, while others had to learn English from scratch. All overcame linguistic, cultural, and a variety of other hurdles to translate their acts for an English-speaking audience, which can potentially take their act from quiet clubs to packed theaters. They addressed a variety of topics, including the beauty of foreign accents, how American and British audiences are simultaneously more and less approachable, and why Germans aren’t exactly known for their sense of humor.” – Vulture

“As Star Wars: The Rise of Skywalker‘s second unit director, and the first woman to ever hold the megaphone on a Star Wars movie, [Victoria] Mahoney got to experience all of it. Now that the movie is out, Mahoney — who’s been a writer, producer, actor, and director (Grey’s Anatomy, I Am the Night, her indie film Yelling to the Sky) — can finally talk about it.” – Wired

“The US’s most prestigious awards for romance writing, the Ritas, have been cancelled after a host of judges and entrants pulled out over an ongoing racism row involving the industry’s largest trade group, the Romance Writers of America.” – The Guardian

Under Assembly Bill 5, “Uber and Lyft drivers, musicians, dancers, singers, artists of all kinds, freelance journalists, etc., under contract now will have to be employed, rather than paid as independent contractors under [what’s called] the ‘ABC test’.” AB5 has been in effect for a week, and already opera and theatre productions are being put on hold or called off — “just the beginning of a flood of potential problems, complaints, job losses, and project cancellations.” – San Francisco Classical Voice

“The plan, the American Federation of Musicians and Employers’ Pension Fund — which covers more than 50,000 people, including Broadway musicians, players in some orchestras, and freelance musicians and recording artists — declared over the summer that it was in ‘critical and declining status’ and would run out of money to pay benefits within 20 years. … Now its trustees are taking the rare step of trying to cut benefits that have already been earned by many of the plan’s participants.” – The New York Times

Her memoir, published in 1994, when she was 27, “established her as one of the most provocative writers of her generation, generating awe among readers who saw in her work an honest depiction of depression and mental health issues, as well as derision from critics who accused her of self-absorption, narcissism and relentless self-promotion. … Ms. Wurtzel went on to make ‘a career out of my emotions,’ as she later put it, receiving a reported $500,000 advance for her second book, the essay collection Bitch: In Praise of Difficult Women (1998).” – The Washington Post

Byron Stripling, the former lead trumpet of the Count Basie Orchestra, “has conducted the [PSO] as a guest and will make his debut as principal [pops] conductor in October. This is only the second time the orchestra has named a principal pops conductor. The first was the renowned Marvin Hamlisch, who was hired in 1995 and died in 2012.” – Pittsburgh Post-Gazette

Both the retrospective and the prospective interpretations of the Hubble Constant have stoked ongoing controversy in the 90 years since Edwin Powell Hubble published the first definitive evidence of an expanding universe in 1929. Recently, the controversy has taken on yet another guise, as increasingly precise techniques for measuring the expansion rate have begun to yield distinctly different predictions. The discrepancy has cosmologists wondering whether they are missing important elements in their models of how the Universe evolved from the Big Bang to today. – Aeon

“There are more resonances between programming and poetry than you might think. Computer science is an art form of words and punctuation, thoughtfully placed and goal-oriented, even if not necessarily deployed to evoke surprise or longing. Laid out on a page, every program uses indentations, stanzas, and a distinctive visual hierarchy to convey meaning. In the best cases, a close-reader of code will be rewarded with a sense of awe for the way ideas have been captured in words.” – The New Yorker

When the Taliban destroyed the historic Bamiyan Budha, the international response “was indeed collective, a near-universal eruption of outrage and dismay at the loss. At the United Nations, after the Taliban announced its intent to destroy the statues, representatives of countries from around the world, Muslim and Christian alike, spoke of the Taliban’s intent as barbaric, and condemned the threatened vandalism. After the deed was done, and the ancient statues were reduced to rubble, the event defined the Taliban as an outlaw regime, uncivilized and evil.” – Washington Post

It was disheartening to realize that almost all of the statements issued yesterday by museums and their professional organizations “condemn[ing] the targeting of cultural sites for destruction” failed to cast blame for those shameful threats directly where the blame lies — on President Trump. – Lee Rosenbaum

Defense secretary Mark Esper acknowledged that striking cultural sites with no military value would be a war crime, putting him at odds with the president, who insisted such places would be legitimate targets. Mr. Trump’s threats generated condemnation at home and abroad while deeply discomfiting American military leaders who have made a career of upholding the laws of war. – The New York Times

If disinformation in 2016 was characterized by Macedonian spammers pushing pro-Trump fake news and Russian trolls running rampant on platforms, 2020 is shaping up to be the year communications pros for hire provide sophisticated online propaganda operations to anyone willing to pay. Around the globe, politicians, parties, governments, and other clients hire what is known in the industry as “black PR” firms to spread lies and manipulate online discourse. – BuzzFeedNews

The site BachTrack tracks concerts internationally: “In 2019, we listed nearly 35,000 performances of concerts, opera and dance – more than ever before.” – BachTrack 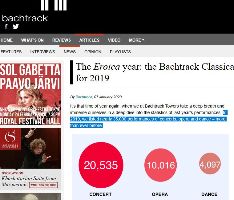