You are here: Home / Archives for nakiri 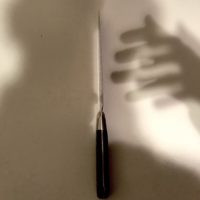 One of the few short stories I've written, a lifetime ago, begins with a declaration that I stole cookbooks. Yes, I did lift some classics as well as a set of what I thought were "good" kitchen knives from a foofy store in San Diego. I learned later that the knives were French, not big-deal German, and in spite of their ridiculous price, considered just OK. When I took the biggest in my hand and pushed it through something, it cut just as well as the $1.99 drug-store serrated knife I already had and still use almost 50 years later, a … END_OF_DOCUMENT_TOKEN_TO_BE_REPLACED

The media make a potentially fatal mistake by dividing arts coverage into high and low, old and young, and by trivializing our passionate attraction to things. In Out There I propose that all creative expression has the potential to be both … END_OF_DOCUMENT_TOKEN_TO_BE_REPLACED