You are here: Home / Archives for Matthew Shepard 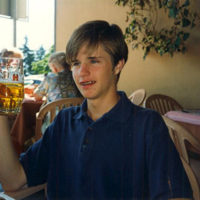 I wrote this in October, 2008, for the online "Obit Magazine," which called itself " 'The New Yorker' of Death." It's been two decades since his murder. None of us can control how we’re remembered, though we may try to live in ways that minimize the dancing on our graves. Yet a special place should be made for those who are memorialized not for how they lived, but how they died. Those singular victims of war, accident, or crime may become famous, even important. But their daily voices, their quirks and smiles, their plain ambitions and … END_OF_DOCUMENT_TOKEN_TO_BE_REPLACED

I ask this leading question because, though we know the answer, we persist in champing at the usual bit. Almost no one running for office will discuss the arts or something as specific as gay rights when business and war put national, even international, livelihood at risk. Yet the health and some of the wealth of civil society depends upon the health of the arts, upon the survival of its small as well as large institutions, and upon the strength of its journalist criticism, now under mindless attack. Our souls too depend upon the arts, but … END_OF_DOCUMENT_TOKEN_TO_BE_REPLACED

The media make a potentially fatal mistake by dividing arts coverage into high and low, old and young, and by trivializing our passionate attraction to things. In Out There I propose that all creative expression has the potential to be both … END_OF_DOCUMENT_TOKEN_TO_BE_REPLACED