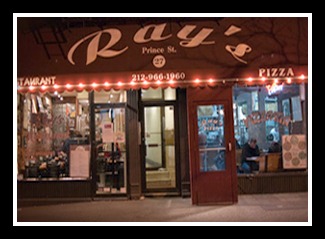 If you read the New York Times, you may know that Ray’s Pizza is about to bite the dust. I’m going to direct you to a piece I wrote for Obit Magazine on that very subject in just a minute, and all the pertinent links are there. But first, I need to say some things to those few who hadn’t heard the tremendous news and are now beginning your slow swoons of nostalgic regret.

Ray’s isn’t that good. It never was. It’s just OK.

Ray’s, the first one on Prince Street and not the many famous original first authentic namesakes around town, isn’t all that old, either. Yours truly was in eighth grade when it opened, and I’m still a boy at heart; JFK would be elected one year after. Paris is peppered with bistros and restaurants two, three times its age, a few of them with opening-day napkins still being used.

None of that makes any difference, because if you love Ray’s or, more likely, love the idea of Ray’s, you will feel its loss terribly. Imaginary madeleines are just as powerful as real ones, because both lead to memories of pizzas past. Don’t be confused when, as you return for a last supper at Ray’s or any of your shuttering favorites, it doesn’t seem “the same.” Every bite we take is different from all our previous ones — even of the same thing. Can’t help that, it’s the way we’re built.

Here’s that link, but do come back.

Me, I have no “best” pizza in my repertoire. I can tap only novel ones with bacon marmalade, chain-store ones I carefully burned to a tasty crisp, flaccid ones that dropped their glop onto my single pair of good pants.

Then there was the one brought to us by Mercury, the fleet-footed waiter. He ran to the kitchen to pick up the tray, ran back toward the open archway, grabbed some salt from an open bowl– I hope it was salt — and flung it on top. Never stopping, he placed his gift gently on our outdoor table, smiling a young man’s wooing smile.

It was almost midnight. Ana, John and I sat at the edge of a small, ancient piazza, its dead fountain and dirty columns lit by Fellini floods that turned the holes of darkness around us into black velvet. The crust of my first Rome pizza cracked under my hand, but I scooped the loose tomato and hot, white cheese before they could fall and lifted everything into my mouth.

Our friend Ana, artist Ana Mendieta, knew how we would respond, and for a moment at least she didn’t say a word — just threw back her head and laughed a generous, raucous laugh that echoed and bounced around the piazza’s cold stone.

The media make a potentially fatal mistake by dividing arts coverage into high and low, old and young, and by trivializing our passionate attraction to things. In Out There I propose that all creative expression has the potential to be both … END_OF_DOCUMENT_TOKEN_TO_BE_REPLACED