The artist–critic war of attrition is boring. It’s a cliché — and if there’s a common enemy that all artists and all critics should share, then cliché is that enemy. When people give me that look upon discovering that I’m a critic and I’m a director — that look that says they’re suddenly not sure where to put me, that I must be a traitor to one camp, and which one is it? — I generally laugh it off, as if to say, Yeah, crazy world isn’t it? But what I really want to tell them is that at heart, criticism and directing are the same. – New York Magazine 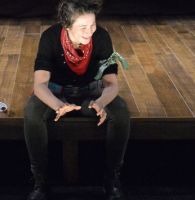