By the time Anna Todd wrote Chapter 90—of an eventual 295 chapters—her novel-in-progress had been read more than 1 million times. Multiple literary agents reached out to her, but she dismissed them as “crazy people,” figuring no legitimate professional would seek out One Direction fan fiction. Readers composed sequels starring After’s characters, uploaded video homages to the book, and—finally convincing Todd that she might have something big on her hands—chatted as Tessa and Harry on Twitter role-playing accounts. 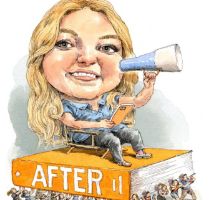