Even Herodotus never considered how to integrate the historic timelines of the Greeks, Egyptians, and Persians. The problem was the lack of any fixed common calendar, any agreed-upon way of determining which year was which and what happened when, since each civilization had its own notional Year One. Then, because he got tired of having to consult many different books, the ruler of a kingdom on the Caspian Sea asked a Persian scholar to develop a timeline that could cover all peoples and their histories. (It was only happenstance that this happened in a year that carried a big round number in the European calendar.) 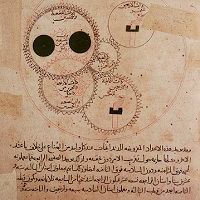