They’ve begun playing in street medians and leafleting concertgoers to bring attention to the fact that they’ve been working without a contract since early September. “The players are seeking a multi-year agreement that, in addition to a boost in compensation …, will implement previously negotiated terms regarding the number of full-time musicians in the BSO. The twice-extended contract called for a total of 83. (In 2000, the total was 96, plus two librarians.)” 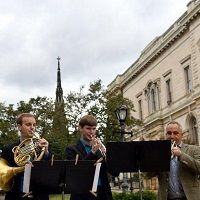