Artemisia’s Intent, a one-woman show created by a group calling itself The Anthropologists, tells the story of Artemisia Gentileschi’s rape, and her prosecution of her rapist, “in her own words, which are eerily akin to those of modern women going through similar struggles. … The company, a New York City-based theatre troupe that aims to inspire social action with their work, uses a collaborative and research-based approach, focusing on creating theatre directly from source materials.” 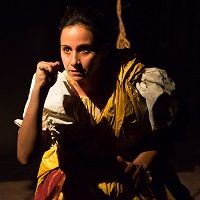