“The big changes to the Macbeth at the Folger Theatre include famous monologues that have been substantially trimmed; a newly heroic Macduff and Lady Macduff, who have bigger roles than Shakespeare dreamed of; and witches in extended sequences of song and dance. … This Macbeth is a painstakingly assembled revival of a version that’s about 350 years old, adapted by William Davenant as London’s theaters reopened after being shut down for 18 years during England’s Civil War.” 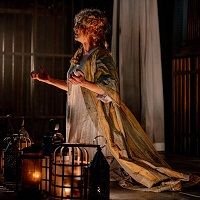