The idea is that the Pergola on the River, as it would be called, would be in place for three years. It would then be removed and the arts centre would go ahead with a long-held ambition to use the roof for open-air performances. But the Twentieth Century Society, a conservation group, said it was shocked by the proposals and would be objecting in the strongest terms. 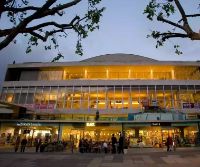