Touring is always in some sort of crisis. And currently it’s at the mid-scale, as highlighted by ACE’s Analysis of Theatre in England report in 2016. Venues say there is a dearth of shows, while producers say there’s not enough demand to make them. Meanwhile historic mid-scale audiences are ebbing away, undernourished, making the whole thing even less viable. It’s a catch-22. At conferences, roundtables and gatherings we lament, in hushed tones, the unsolvable conundrum of the mid-scale. 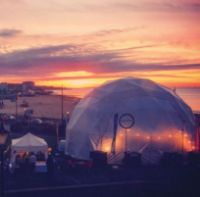