“The reform is called the Copyright Directive and it was first proposed in 2016. On Wednesday, members of European Parliament voted 438-226 in favor of adopting the directive. The law is meant to be an overhaul of copyright rules, aimed at making sure publishers and artists are compensated by platforms like Google or Facebook. … The controversial directive contains two articles” — known as the “link tax” and the “upload filter” — “that open internet and free speech advocates believe could fundamentally alter the way the internet works. Here’s what they mean.” 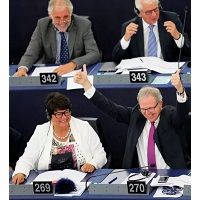