The current generation of Broadway fans probably remembers her as the original Madame Morrible in Wicked, but she won her Tony for playing Madge Kendal opposite Philip Anglim in the original Broadway run (1979) of The Elephant Man. She’s also remembered, by an earlier generation, as one of the Pigeon sisters in the original stage and screen versions of Neil Simon’s The Odd Couple. 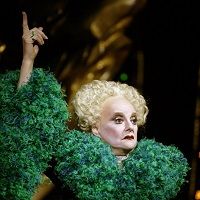