Known for a wry, self-mocking persona and for doing his own stunts (and, offscreen, for a quick temper, hard living, and a tempestuous love life), Reynolds appeared in dozens and dozens of films and TV shows (and directed more than a few) over the decades; from 1978 to 1982, he was the number-one box-office draw. He was most popular in action films and romantic comedies, but he won greatest critical acclaim for performances in Deliverance and Boogie Nights. 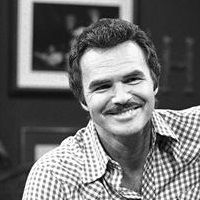