“Of the writers in Kurosawa’s stable, Mr. Hashimoto was among the longest-serving, contributing to eight screenplays from 1950 to 1970. Their other pictures together include Throne of Blood (1957), a reworking of Macbeth set in feudal Japan; The Hidden Fortress (1958), an adventure film about a princess escorted in disguise through enemy territory; and Dodes’ka-den (1970), about the residents of a Tokyo slum.” 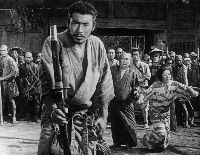