“The paintings had been stolen in an elaborate scam involving at least eight different con artists, the police confirmed. At least one had posed as a Jewish rabbi with diplomatic immunity and offered the respective gallery owners €26 million for the paintings before stealing them. The theft took place at a rented office in Monza, above the Albanian embassy … on April 20th, 2017.” 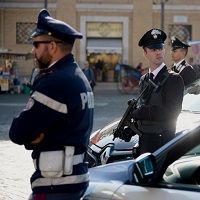