“In Morocco, where state funding and institutions for the arts is scarce, break dancing has empowered young people to make their own entertainment since its arrival in the 1980s. … While protesters and outspoken artists were targets, dancers flew under the radar because they were seen as apolitical. When a second generation of Moroccan B-boy crews emerged in the early 2000s, their art really began to flourish.” (photo journal) 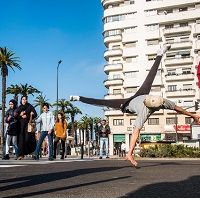