The Louvre, as usual, had the highest attendance, although the National Museum of China is a very close second, with the Met a distant third. The two most popular shows – which comes first depends on which way you count – were of Impressionist and Modern paintings in Paris and of late 12th-century Buddhist sculptures in Tokyo. 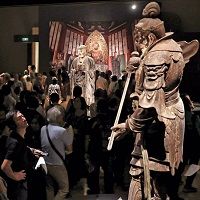