“Lift: Slobodan Show premiered at a packed theatre in Gračanica, a Serb-populated town outside Kosovo’s capital of Pristina. It was performed by a local theatre group and artists from Serbia. Kosovo’s ethnic Albanian majority shunned the play.” Slobodan Milošević, the eponymous dictator, died in 2006 while on trial for war crimes and genocide in The Hague. 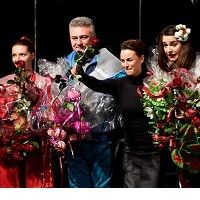