“Anti-loitering tactics first came into UK law as part of the Vagrancy Act of 1824, which was aimed at tackling begging, prostitution, and sleeping rough, which are still criminalized today. The approach of a government of 200 years ago to tackle a symptom of a social problem rather than its root cause has fundamentally not changed. I began to think that the classical music played in these stations was symptomatic of a backward society.” 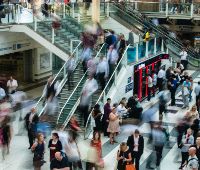