“Ben Enwonwu’s 1974 painting of the Ife princess Adetutu Ademiluyi, known as Tutu, is a national icon in Nigeria, with poster reproductions hanging on walls in homes all over the country. The artist, regarded as the founding father of Nigerian modernism, painted three versions of Tutu and the image became a symbol of national reconciliation. But all three were lost and became the subject of much speculation.” Until late last year, that is. 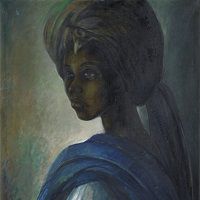