Sure, the casting may have been ill-starred, but backstage, in the “opera factory, … the company’s army of artists and artisans started work nearly a year before its opening night, on New Year’s Eve.” Photographer Todd Heisler and reporter Michael Cooper give us a look at what the troops have been whipping up. 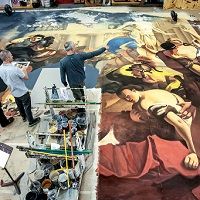