“[She] became a nightclub sensation in the 1950s with her then-husband, the comically disruptive entertainer Louis Prima, and … gradually emerged from his shadow as an acclaimed solo performer” whose hits with bandleader Nelson Riddle, on Capitol and later on Frank Sinatra’s Reprise label, included the million-seller “I Wish You Love” and “Little Girl Blue/Little Girl New.” 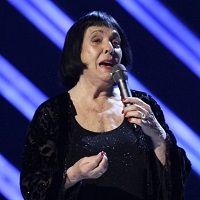