“I hate to say it, but I think we must now accept that the Leonardo is a wreck. Severe flaking was recorded as early as 1517 and according to Vasari it was ‘ruined’ by 1556. Vigorous overcleaning and retouching has only made things worse. It’s time for a proper debate on how much ‘original’ Leonardo is actually visible. Persuading people to queue around the block to see such a damaged painting is simply a triumph of marketing over connoisseurship. But that’s enough about The Last Supper.” 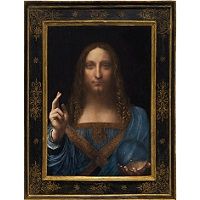